Cucuta, Colombia – A pink stroller is surrounded by rubbish where children covered in dirt linger around a makeshift camp under a bridge in Colombia’s Cucuta.

The anesthetised gaze in the children’s eyes reflects their precarious health situation which worsens by the week.

They are sheltering from the scorching sun in the shadow of a bridge that connects Venezuela with Colombia. This a point of relief for many Venezuelans who have faced the hardship of a long trip fleeing the humanitarian and economic crisis facing their home.

Under the bridge, the crude reality of the migration crisis is impossible to miss.

About 550,000 Venezuelans left for Colombia at the end of 2017, according to migration authorities. There has been a 62 percent increase in the second half of last year, with many crossing on foot.

Among those fleeing are complete indigenous clans who are trying to escape hunger in Venezuela and are hoping to receive medical aid for themselves and their children in Colombia.

There are two main entrance points to get from Venezuela to the Colombian border city Cucuta. The Simon Bolivar Bridge, crossed daily by thousands and a symbol for the mass exodus of Venezuelan refugees, and the Francisco de Paula Santander bridge, a quieter border crossing under which rights groups are saying a humanitarian disaster is taking place.

It is here that a number of indigenous groups can be found. They either waded through the river or were able to cross the bridge before access was restricted.

Under the bridge, people rest on the ground as underfed toddlers with bloated bellies and babies with scabies roam around.

“The children are dying because of the lack of medicines and food,” says the 38-year-old Remigio Segundo Romero Yordes.

Romero belongs to a complete indigenous Yukpa clan, of about 150 persons that left their ancestral lands of the Sierra de Perija, in Venezuela’s Zulia state, just across the border.

At a distance of a few hundred metres, two additional Yukpa clans add to the more than 700 indigenous refugees who have crossed to Colombia, according to the local ombudsman’s office of Colombia. The majority are living in dire conditions.

The ombudsman’s office tells Al Jazeera that many of the children here have tuberculosis and are malnourished.

Nevertheless, staying in Venezuela was not an option according to Romero.

“When [Venezuelan President Nicolas] Maduro received power from [late President] Chavez, he terminated everything,” Romero says. “There is no food and there are no medicines.”

The indigenous hope to receive aid and support in Colombia and are determined to stay.

Last year, inflation in Venezuela reached at least 2,600 percent and this year it is expected to overtake 13,000 percent, according to the IMF.

Meanwhile, there are severe food and medicine shortages, which worsen every week. The homicide rate is among the highest in the world and the government has cracked down on opponents.

Most of the indigenous people who have fled to Colombia sleep in makeshift tents made from branches and rubbish bags.

Children can be seen playing cards under canopies. Some have a dry rash all over their body. Women often hang up clothes they washed in the dirty waters of the Tachira River, which is also used for consumption.

Today, the Yukpa survive by selling hats and baskets on the streets of Cucuta – a chaotic, dusty city and a sprawling open-air market for Venezuelan contraband goods.

Older women braid hats that are sold at the entrance of the bridge by a few men who try to get the attention of passersby.

They say they feel completely abandoned, adding that the Colombian government is not aiding them.

“Better said, they are threatening us,” says Romero, who first arrived in August 2017.

He says that the Colombian government already deported them to Venezuela three times for not having valid identity papers, but they came back every time.

The municipality did not respond to Al Jazeera’s request for comment.

The Yukpa belong to a binational tribe that lives on both sides of the border.

Olga Lucia Fuentes, a Colombian consultant in development, human rights and peace, says that Colombia’s Constitutional Court ordered the state in 2009 to formulate plans to ethnically safeguard the survival of all Yukpas, whose existence was previously under threat by the Colombian internal conflict.

Most Yukpa do not possess identity papers, however, and it is hard for them to prove their binationality. Horacio Guerrero, Director of Indigenous Affairs of Colombia’s Ministry of the Interior, said Venezuela did not respond it the ministry’s request to establish the identity of the Yukpa. They are, therefore, treated as regular foreigners by Venezuelan authorities.

Colombia’s President Juan Manuel Santos announced last month that only Venezuelans with a valid passport and holders of a migration border card, of which no new ones are issued, can enter Colombia.

According to Pedro Santiago Posada Arango, director of indigenous issues from the national Ombudsman’s office in Colombia, however, the Yukpa are “an indigenous border community [and] they have all the rights to enter Colombia, independently of whether they are registered in on or in both countries”.

He adds that the Yukpa “should be treated as border peoples and therefore should receive help and attention”.

Posada stresses that the situation is very complicated and that there needs to be an assessment of those living under and near the Francisco de Paula Santander Bridge.

He says that errors have been made and that the regular requirements cannot be asked from the Yukpa, because of their special status.

Additionally, Christian Visnes, director of the Norwegian Refugee Council in Colombia, says Colombia signed up to the Cartagena agreement and, therefore, cannot deport refugees of any kind.

He suspects that the state might be afraid of attracting more indigenous Yukpa if aid is given, but “in this case, it’s evident that there are humanitarian needs and, therefore, they should not be deported”.

‘We will end up dead’

For the Yukpa themselves, it is a matter of life or death.

“It’s like escaping from boiling water and they throw us right back in,” Romero explains.

“We will end up dead,” he says as he fears the consequences of the grave health situation of his clan.

There is also distrust between the indigenous groups and Colombian authorities.

On a few occasions, when the Family Welfare state-institute handed out milk and bread, they also asked which children were ill, sometimes removing children from the makeshift camps.

“I haven’t seen my baby in a month,” wails Milagro, a 17-year-old mother, who only gave her first name, tells Al Jazeera.

Milagro watched as Family Welfare took away her child, she says, adding that she has no idea where her daughter was taken.

According to Gladys Navarro Uribe, president of the Colombian Red Cross – section Norte de Santander, the children who are removed are taken care of by the Family Welfare institute.

A source with Family Welfare, who asked not to be named, also says the Colombian state sometimes removes children found in “vulnerability or in danger, and with health problems”. The source adds that the children are placed in substitute homes from the institute and are taken back as soon as they are ready to return.

Additionally, the source denies that the Yukpa are deported, but rather “returned” to their lands, adding that their presence under the bridge is a disturbance to the nearby neighbourhoods.

To compound the misery of the Yukpa, many often wade the river water to go back to the Venezuelan border to receive food – though rotten – that they cannot obtain on the Colombian side.

Indigenous women who fear being detained and deported, choose to wade through the deeper parts of the river to bring food, often carrying young children with them.

If they are caught, the food is often taken by Colombian customs authorities, the Yukpa say.

“Sometimes, the women take about 10 kilos. The DIAN [Colombian customs] take the food from them saying that it is contraband,” says the 39-year old Bertilio Gonzalez, a member of one of the three Yukpa clans. “This is for our consumption!” Gonzalez adds.

DIAN authorities maintain that the food that is taken does “not comply with sanitary standards”.

Such food seizures have led to violent confrontations between the Yukpa and the DIAN, illustrating a crisis that looks certain to deepen.

Back at the makeshift camp where Romero lives, he waves his arms as he goes on about the binationality of his peoples.

“They do not recognise us as indigenous, but rather as regular Venezuelans,” he says.

“We can cross the border without documents!” he says while walking through the rubbish.

“In the [Colombian and Venezuelan] constitution, the indigenous are recognised!” 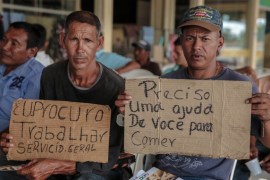 Countries announce stricter measures as they deal with a big influx of migrants from Venezuela.