The International Criminal Court (ICC) has taken the first step in an investigation into Philippine President Rodrigo Duterte‘s drug war, which has left thousands of people dead.

Duterte’s office announced on Thursday that it has received a notice that the international tribunal “is opening preliminary examination” into the deaths to determine if the gravity of the crimes fall under its jurisdiction.

The case stems from a complaint filed before the international court last year accusing Duterte of ordering the killings “repeatedly, unchangingly, and continuously”.

Harry Roque, Duterte’s spokesman told reporters in Manila, that the president “welcomes” the move, but added that it is “intended to embarrass” him.

“The president has said that he welcomes this preliminary examination, because he is sick and tired of being accused of the commission of crimes against humanity,” Roque said.

Under the ICC rules, it has jurisdiction over four main crimes of genocide, crimes against humanity, war crimes, and crimes of aggression.

In a statement posted online on Thursday, ICC Prosecutor Fatou Bensouda confirmed the report, saying that she has “closely followed” the situation in the Philippines since 2016.

“While some of such killings have reportedly occurred in the context of clashes between or within gangs, it is alleged that many of the reported incidents involved extra-judicial killings in the course of police anti-drug operations,” she said.

Bensouda also gave an assurance that she is undertaking her work “with full independence and impartiality”.

But Roque dismissed the ICC process as “a waste of time”, and argued that the Philippines’ war on drugs cannot be considered as a “crime against humanity”, because it is a “legitimate police operation” to protect the state.

He also said the Philippine courts are capable of undertaking the complaints, making it unnecessary for the international court to step in.

An opposition senator and a congressman, who joined in filing the ICC complaint last year, has said that Duterte’s “shoot to kill” order has become part of the president’s “national policy”.

According to a Human Rights Watch (HRW) report published in January 2018, more than 12,000 people have been killed since Duterte took office in June 2016. Other estimates put the death toll as high as 14,000.

The Duterte administration has disputed these numbers, claiming that 3,906 “drug personalities” were killed during police operations from July 1, 2016 to September 26, 2017.

While the government insists that all the killings were lawful, Duterte has been repeatedly quoted saying in public that he “will kill more if only to get rid of drugs”.

He also admitted killing people during his 22 years as mayor of Davao, a city in the southern island of Mindanao.

Duterte vowed not only to “pardon” police officers convicted of drug killings, but also reinstate and promote them.

Critics have said that Duterte’s public declarations have allowed police to indiscriminately kill suspects, and heightened the culture of impunity in the country.

An Al Jazeera investigation revealed that police officers were involved in attempted killings of unarmed drug suspects who had already surrendered to authorities.

Duterte was also quoted as saying that innocent civilians and children killed in the drug war were “collateral damage”.

‘Not above the law’

In Manila, Antonio Trillanes, the opposition senator and ICC petitioner, said the decision of the international court is a welcome news.

“This development should jolt Duterte into realising that he is not above the law,” Trillanes posted on social media.

“More importantly, this is the first step for the victims’ families’ quest for justice.”

The “preliminary examination” is an “important step towards accountability for the thousands of killings in the so-called war on drugs,” HRW Philippines said in a statement to Al Jazeera.

“There have been no successful prosecutions or convictions of police implicated in summary killings despite compelling evidence of such abuses.”

In the past, Duterte had declared that he “will not be intimidated” by the international tribunal, and dismissed it as “bulls***”. He also threatened to withdraw the Philippines’ membership in the court calling it “useless”. 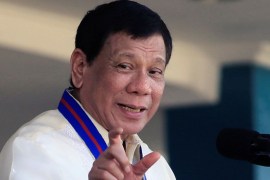 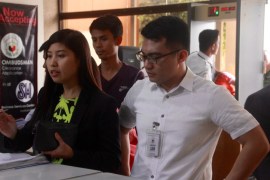 The lawyers taking on Duterte over his ‘war on drugs’

Efren Morillo’s case marks the first significant legal challenge to the deadly crackdown on drugs in the Philippines.