Three British backpackers had to be rescued on Tuesday morning, after they woke up to find crocodile-infested floodwater had partially submerged their campervan.

The van was parked in a picnic area in Queensland, just south of Cairns, that had been dry when they went to sleep, but torrential rain had fallen during the night.

The tourists scrambled onto the roof of their vehicle and watched nervously as the water continued to rise.

Queensland Fire and Rescue officer Guy Bulmer was the first on the scene. He said that the backpackers did the right thing by staying put.

“It was good they decided not to try and self-evacuate from the vehicle with water levels rising rapidly and it had some flow,” Bulmer said.

“You just don’t know what’s in those flooded waters; there could be crocodiles or other obstacles that could cause injury,” he added.

“There was a croc sign almost right next to the vehicle.”

In a separate incident, one woman was rescued from the roof of her car on Monday, after it was washed off a flooded causeway near Palmerston in the Northern Territory.

Northern Territory Emergency Services Northern Command regional manager, Mark Cunnington, told ABC News that she was lucky to be alive, given the flood gauge had a reading of 1.2 metres, and “impassable” signs were also in place at the time of the incident.

Concerns were also raised that other drivers continued to use the crossing while the rescue was under way.

Although the onset of the monsoon was the fourth-latest since records began, the Bureau of Meteorology said that this year had been one of the wettest, with 16 sites reaching their highest rainfall on record.

Humpty Doo had the highest rainfall recorded in January, with a staggering 1205mm reported.

The increased rainfall is likely to be enhanced by the La Nina conditions which are currently in place in the Pacific Ocean, and the Bureau of Meteorology said the Northern Territory should prepare for further flooding when more storms sweep through later in the week. 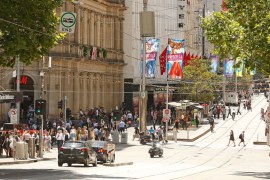 50,000 customers lose power as cooling devices cause a surge in demand. 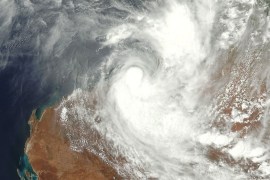 Rain from a long-lived tropical cyclone promises a good harvest for Australian farmers. 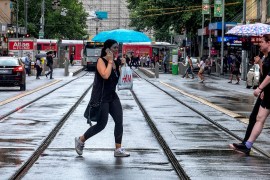