Ethiopia has released new details about the six-month state of emergency ordered last week amid mass anti-government protests, according to state media reports.

Siraj Fegessa, minister of defence and head of the command post charged with implementing the state of emergency order, announced the details on Wednesday, state broadcasters FANA Television and EBC said.

“The government has previously made several efforts to curtail violence, but lives have continued to be lost, many have been displaced and economic infrastructure has been damaged,” Fegessa said, as quoted by Reuters news agency.

But at the time, few details were released about how the state of emergency – the second in Ethiopia since 2016 – would function.

The order comes amid widespread anti-government protests calling for more political inclusion, the release of political prisoners and an end to human rights abuses.

According to FANA TV, the state of emergency prohibits:

It also includes prohibitions on poorly defined activities, such as any action that may “erode tolerance and unity”, or “affect the peace and wellbeing” of people in Ethiopia.

The order bars anyone from carrying weapons in “unauthorised regions”, but those regions are not specified, FANA reported.

Earlier, the broadcaster said the state of emergency would also give law enforcement officers the power to detain anyone suspected of violating “the constitutional order”.

They would also have the ability to search houses, cars and individuals, all without a court warrant.

The government is expected to deliver the state of emergency decree to parliament for ratification within 15 days from last Friday. 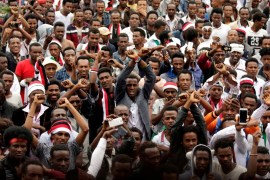 Ethiopia declared a state of emergency on the heels of mass anti-government rallies. But just who is protesting and why? 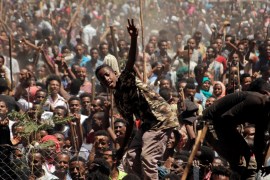