“Mister president, don‘t continue with policies that force the most vulnerable parts of our society – retired people, old people – to go hungry,“ Hugo Moyano, head of Argentina‘s largest umbrella union, the CGT, said at the rally.

Argentines continue to lose purchasing power to a high inflation rate and many are frustrated with layoffs, increases in fuel and transportation costs and the slashing of subsidies for utilities.

Macri, who came to power in 2015, introduced economic reforms that aim to cut Argentina’s fiscal deficit by reducing subsidies from home heating gas and transportation costs.

According to local media, the organisers estimated that 400,000 attended Wednesday’s rally, while the government of the city of Buenos Aires said about 140,000 were present.

Argentina recorded an inflation rate of 24.8 percent in 2017, according to official figures, and although the target this year was set at 15 percent, private consultants expect the same for 2018.

According to analysts, Macri is trying to control the cost of living with a change in the wages, a move unions reject outright.

The government maintains it wants to clean up the economy, open up with the market and return the country’s investment grade.

The president aims to cut the primary fiscal deficit to 3.2 percent of gross domestic product this year from 3.9 in 2017.

Macri has also promised big changes to labour laws, widely seen as among the most costly to companies in Latin America and a leading obstacle to investment,

But the president lacks a majority in Congress, and his administration was rocked by violent protests over pension reforms in December. Since then he has scaled back unpopular legislation as he prepares to run for re-election next year. He is now taking a piecemeal approach to labour law changes. 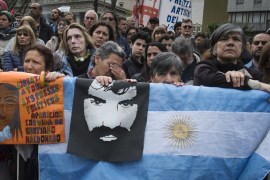 Defiance of the Mapuche

Why the Mapuche of Argentina and Chile have been pushed to the brink of insurrection in defence of their ancient lands.