An opposition senator in the Philippines said the death toll in the government’s war on drugs has now surpassed 20,000 since President Rodrigo Duterte came to office in 2016.

In a speech before the Philippine Senate on Wednesday, Antonio Trillanes said the Duterte administration’s own report shows 3,967 “drug personalities” have been killed after allegedly resisting arrest during police operations between July 1, 2016 and November 27, 2017.

The report also said 118,287 drug personalities have been arrested, and 1,308,078 others surrendered to authorities during the same period.

All figures were listed as “accomplishments” in the official document titled Fighting Illegal Drugs: #RealNumbers.

Based on the government report, this means the real number of deaths related to the drug war is at least 20,322, Senator Trillanes noted.

“Therefore, all of these deaths are drug-related and not for other causes. That is clear,” Trillanes said, adding the official document cited several anti-drug government agencies as sources.

“While the country continues to laugh at the lewd jokes of Duterte, more than 20,000 of our countrymen have been killed.”

Trillanes, speaking in Filipino and English, said it is only in the Philippines that a president “flaunts as an accomplishment the killing of people he despises.

“They basically admitted that there are no so-called vigilante killings – that these deaths are actually state-sponsored executions,” he said.

The Duterte administration and his police force have maintained all the dead were killed during legitimate police operations.

In response to Trillanes’ speech, Senator Manny Pacquiao, a pro-Duterte legislator, was quoted by the Philippine Daily Inquirer as saying it was premature for his colleague to make conclusions, when the alleged killings are still being investigated by the government.

Trillanes, a former military officer, has been one of the leading Duterte critics since the 2016 presidential campaign.

He has also accused the president of maintaining undeclared multi-million-dollar bank accounts, and covering up for his son, who has been linked to drug smuggling. Duterte and his allies have denied those allegations.

Trillanes said the Duterte administration failed to extend due process to drug suspects when it carried out the drug-related killings.

He said some of the dead were even innocent, citing the case of 17-year-old high school student Kian delos Santos, who was killed execution-style.

An Al Jazeera investigation has also revealed that police officers were involved in attempted killings of unarmed drug suspects who had already surrendered to authorities.

Another report detailed the killing of children by police officers. Duterte has referred to the children killed during the drug operation as “collateral damage”.

In recent weeks there have also been reports of officers charged with murder, or hired to carry out extrajudicial killings.

Duterte’s drug war is the subject of an ongoing probe by The Hague-based International Criminal Court, which is looking into alleged crimes against humanity in the Philippines.

Carlos Conde, a Human Rights Watch representative in the Philippines, said the figures provided by Trillanes are “not entirely surprising.

“Assuming that this [number] is accurate, this is really worrisome,” he told Al Jazeera, adding the figures were not that different from those provided by other human rights groups.

“This only underscores the need for a United Nations-led investigation that we have been demanding,” Conde said.

“We need to get to the bottom of this, how many people were exactly killed, who are the perpetrators? It is about time that we have a proper accounting of the deaths.” 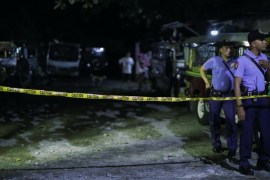 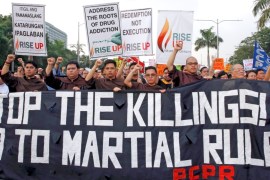