The US secretary of state has acknowledged that his country’s relationship with Turkey is “at a bit of a crisis point”, as his Turkish counterpart, Mevlut Cavusoglu, demanded that the United States “turn words into actions” to resolve their differences in dealing with the Syrian crisis.

At a joint press conference in Ankara on Friday, Rex Tillerson said the US-Turkey alliance “is too valuable” for the two countries not to take action together, particularly on their dispute over the US’ support of the armed Syrian Kurdish YPG, considered a “terrorist group” by the Turkish government.

“Ours is not an alliance of convenience or of temporary interest. It is a time-tested alliance built on common interest and mutual respect,” Tillerson said.

“Our two countries share the same objectives in Syria.”

Standing next to Tillerson, Cavusoglu said Turkey’s relationship with the US “is at a critical stage”, and the two allies need to decide whether “to mend fences, or go in a different direction”.

Cavusoglu said “some of the promises” the US made “were not kept”, alluding to Turkey’s demand that the US-backed YPG leave the Syrian town of Manbij and move east of Euphrates River.

As part of the effort to mend US-Turkish relations, Cavusoglu announced that the two countries have agreed to establish a “joint mechanism” to deal with disputes and to take “collective response”.

But neither Cavusoglu nor Tillerson provided details about the plan.

A war of words between Turkey and the US has escalated ever since Turkey launched a military offensive into the Afrin region of northern Syria in January, in an effort to root out the YPG.

Turkey had also reacted angrily to reports that the US wanted to arm as many as 30,000 Kurdish troops in Syria’s Manbij.

The ongoing operation has left at least 30 Turkish soldiers and over a thousand of YPG fighters killed, according to reports.

Earlier this week, Turkey demanded the US expel the YPG from the Syrian Democratic Forces (SDF) coalition, which has been fighting the Islamic State of Iraq and the Levant (ISIL, also known as ISIS) group in Syria.

The Turkish government views the YPG as an extension of the outlawed the Kurdistan Workers’ Party (PKK), which has fought a decades-long war against Turkey.

Earlier this month, Erdogan accused the US of sending stockpiles of weapons to the YPG in Syria, a claim Tillerson himself denied on Thursday.

Erdogan then threatened to deliver an “Ottoman slap” – a tactic used by Ottoman forces in the 17th century that, according to legend, could be instantly fatal – if the US does not get out of the way.

Speaking to Al Jazeera, Ibrahim Fraihat, a Middle East analyst at the Doha Institute for Graduate Studies, said the Turks are “very angry” over US policy in Syria.

Reflecting Turkish anger towards the US, hundreds of demonstrators marched through the streets of Ankara on Friday in protest against Tillerson’s visit and demanded the US cut ties with the YPG.

Al Jazeera’s Jamal Elshayyal, reporting from Ankara, said it is “very difficult to see” how the two countries can resolve their differences over the YPG dispute.

Turkish sentiments against the US have also grown. A recent poll found that 79 percent of Turks hold an unfavourable view of the US government, with only 18 percent having a favourable view.

Even people-to-people ties are affected with 67 percent of Turks having an unfavourable view of Americans. 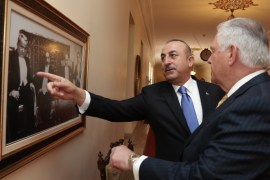 US and Turkey look to mend ties as Syria tension grows

On a visit to Turkey, Secretary of State Rex Tillerson hopes to ease anger over US support for Syrian-Kurdish YPG. 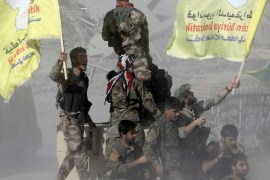 US state secretary is expected in Ankara amid strained relations between the NATO allies over Kurdish rebels in Syria. 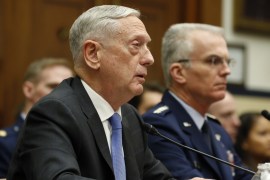 James Mattis says some fighters of the Kurdish-led SDF are shifting towards Afrin region to fight Turkish troops.