Kormakitis, Cyprus – The fitful chirps of birds are the only sounds to break the silence, as Iosif Skordis, a robust 89-year-old with a taste for fuzzy wool caps, unhurriedly takes his usual seat on the narrow balcony of a decades-old cafe.

Turning slightly to his right, he points through an open green door to the handful of men – all in their 60s, at least – huddled around a card game beneath yellowed posters of Catholic popes and Lebanese leaders.

“These ones over there, they are the youngest of those of us still living here,” Skordis says between sips of coffee, as afternoon breaks in Kormakitis.

This tiny hilltop village in the horn of northwestern Cyprus is home to some 100 elderly Maronites, followers of one of the Catholic Church’s oldest branches.

To be sure, time passes slowly here. But in fact, time is fast running out.

“We are headed towards extinction,” says Antonis Haji Roussos, 78, sitting just a few metres away, in the shade of well-kept oleander trees.

“There is no future for our community,” he adds, his voice calm yet imbued with a single, brittle note of emotion.

A winding maze of sloping pathways and brick-and-stone houses, Kormakitis is pinned to the east and west by green rolling plains and idyllic beaches.

Although fluent in Greek, its grey-haired inhabitants share news, jokes and thoughts in their indigenous tongue: a unique variety of Arabic heavily influenced by Aramaic, the language of Jesus.

They are descendants of Christians who fled to Cyprus from modern-day Syria and Lebanon in four successive waves from the late 7th century onwards.

Less than 50 years ago, Kormakitis was home to about 2,000 people. It was the beating heart of the island’s small but vibrant Maronite community.

But then in 1974, a brief Greece-backed coup prompted a military intervention by Turkish forces, which effectively divided the island between a Turkish Cypriot north and a Greek Cypriot south.

The Maronites, who resided in four neighbouring northern villages, suddenly found themselves in the middle of an ethnic conflict that would have a devastating effect on their community.

Their ancestral villages, which had for centuries shielded their culture and customs, were instantly seized by the Turkish army. Overnight, about 80 percent of Cyprus’ Maronites were uprooted, seeking shelter in the Greek-speaking south.

But in Kormakitis, the largest of the villages, hundreds opted to stay behind.

They were unharmed by the fighting, but life became increasingly difficult. With work opportunities shrinking and the village’s only school shut, many – especially the youth – felt they had no choice but to leave Kormakitis for the more affluent south.

Yet for some, abandoning Kormakitis was never an option.

“Where could I have gone?” Skordis asks, without waiting for an answer. “This is where my father was born and died; my mother and siblings, too. I’ve been a farmer all my life and everything I’ve done, I’ve done it here.”

In the end, some 120 Maronites remained “enclaved” in Kormakitis, living north of a United Nations-controlled no-man’s land dividing the Mediterranean island.

For decades, before the easing of border restrictions in 2003, the villagers would need to secure special permission to see their displaced loved ones in person. Contact was brief and sporadic.

“Life was lonely,” recalls 71-year-old Annetta Maurohanna, who has been working at the cafe by the imposing St George Cathedral in the heart of Kormakitis for the past 30 years.

“But I didn’t want to leave,” she adds. “Everyone craves to be at home.”

Each week, a UN truck would visit the largely cut off villagers to deliver foodstuffs, medicine and other vital supplies.

“You’d have to have been here to be able to understand the hardship that we went through,” says Skordis, a father of six, pausing to hold back tears.

“Three of my daughters sent me messages before their weddings saying they didn’t have any money to get married – and I couldn’t send them any,” he continues. “We suffered a lot, and that’s why we now avoid remembering those times, so we don’t get upset.”

Today, there are an estimated 6,000 Maronites living on Cyprus. They are scattered in towns and villages across the south – bar this band of elderly farmers, herdsmen and pensioners residing in Kormakitis, and a handful of families living in Karpasha, further southeast.

Two other nearby Maronite villages – Asomatos and Ayia Marina (a previously mixed Maronite and Turkish Cypriot village) – are empty of their residents and now used by the Turkish army as military bases.

About half of the Maronite population is believed to trace its roots back to Kormakitis, and the vast majority of them have been allowed to repair their previously deserted houses. Its residents have ownership rights and can also sell or rent their land, as well as inherit it, but subject to specific conditions.

The village comes alive again on weekends and holidays, its square filled with children and its cafes and tavernas overflowing with patrons. 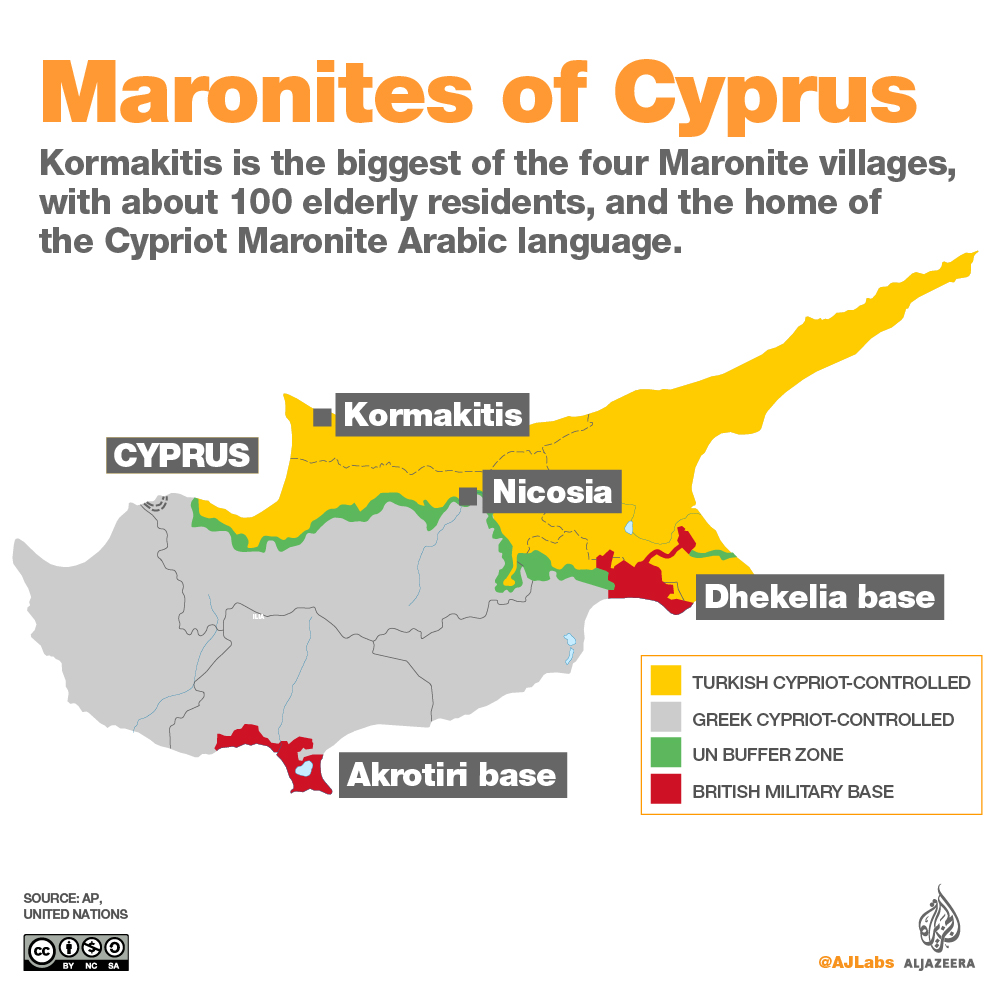 Passed down from generation to generation through everyday conversation, the centuries-old CMA is a variant of Arabic that’s rooted in Aramaic but has taken words from Greek, Turkish and Latin.

It is classified as a “seriously endangered” language by the Council of Europe, while 10 years ago experts created a written alphabet with the aim of codifying and preserving it.

Mysteriously, the ancient dialect is only spoken by Kormakitis natives and not by any others Maronites from the community’s other remaining villages. Until 1974, children in Kormakitis would only begin learning Greek in the first grade.

“Currently, about 1,000 people speak our language, but they’re all aged over 40 and 50,” says Mihalis Hadjiroussos, chairman of the Xki Fi Sanna NGO.

The group, whose name translates to “Speak Our Language”, was set up more than a decade ago to protect and promote CMA through summer camps, afternoon lessons and cultural activities.

Following international pressure, the Cypriot government in 2008 recognised CMA as a minority language, but it did not formally incorporate it into the education system.

That means that summer camps and afternoon classes aside, many younger Maronites see little use in learning a moribund language – distancing themselves further from their endangered community’s identity.

“Our chance to survive as a community, and to save our language, is to go back to our villages,” says Hadjiroussos, 70, sitting around other elderly Maronites in their community’s club in Nicosia, Cyprus’s capital.

“If 2,000 people go back to the village and stay there then the right conditions will be created for people to speak the language – and for weddings between people from the village to take place.”

That’s at the heart of Maronites’ fears over their community’s looming extinction.

Dispersed among Greek Cypriots and away from their parents’ villages, the overwhelming majority of Maronites – an estimated nine out of 10 – marry outside their community.

Giorgos Skordis, a 47-year-old actuary, is a rare exception. His wife, Antoinetta, was the last person to be born in Kormakitis, while the couple’s wedding in 2008 was the first in the village after 1974.

“The community has been almost fully assimilated,” says Skordis, in a cafe in Nicosia.

“Many, perhaps even most [Maronites], have started feeling like Greeks. Even though they came from Lebanon, spoke Arabic and ethnically they’re not Greeks – owing to their schooling, mixed weddings and displacement,” he explains.

“And the ones who don’t feel like that, they’re forced to, in a way, because their children and their grandchildren are Greek Cypriots.”

Cyprus is home to one of the world’s longest-running frozen conflicts.

Greek Cypriot and Turkish Cypriot leaders have long worked towards a deal to reunify the island, but several UN-mediated attempts to reach an agreement have collapsed, often in mutual recrimination, insults and anger.

Amid the charged and pervasive reality of a divided Cyprus, smaller communities such as the Maronites feel trapped between two fronts.

“Greek Cypriots and Turkish Cypriots have massive differences, and we are the victims of that,” says Haji Roussos.

As a non-voting representative of the Maronite community in Cyprus’s House of Representatives for 20 years, Haji Roussos experienced marginalisation first-hand.

“I once met the US ambassador and told him that, ‘We won’t be able to survive without support,'” Haji Roussos says. “He responded, ‘I realise this, you are like the ball in a ping pong match being hit around, but we can’t do anything about it.'”

Under the Republic of Cyprus Constitution of 1960, the Maronite community is recognised as a “religious group” but not a minority.

Haji Roussos and others have long campaigned for the change of the community’s status – but to no avail.

“Although there was goodwill on behalf of the [Greek Cypriot] government and the parliament, but they used the argument that they couldn’t change the Constitution,” he says.

At independence in 1960, Cyprus’s bicommunal constitution arranged for a Greek Cypriot president and Turkish Cypriot deputy, in a power-sharing agreement that was short-lived.

Solely identified as a “religious group”, the island’s Maronites, Armenians and Latins were asked to choose which of the two largest communities to join and all three opted to be identified as Greek Cypriots due to religious affinity and linguistic and cultural bonds – adding yet another layer to the island’s complex reality.

“The Cyprus problem is presented as simply a Greek-Turkish problem, which results in all other important matters being ignored and side-stepped,” says Costas Constantinou, a professor of international relations at the University of Cyprus.

“There is assimilation, while others say that the Cyprus problem shouldn’t be complicated any further by also looking at the issues of minority groups,” he adds.

Last summer, Turkish Cypriot leaders announced that a plan would be presented about the opening up of the rest of Maronite villages to their former inhabitants and the completion of infrastructure work to make resettlement possible.

Not much has since happened, but the Greek Cypriot side at the time rejected the move, calling it “communications tricks” and part of a plan to not place such villages under Greek Cypriot administration after a solution to the island’s division is reached.

Back in Kormakitis, Maurohanna, the cafe server who has known no other home than this village, said time is of the essence.

“We sacrificed ourselves and we managed to keep our villages,” she says.

“But if no people return, everything will cease to exist.

“This is what we want: a peaceful resolution to the Cyprus problem and everybody to come back.”