Colombia and Brazil have tightened border controls with Venezuela as both nations deal with a big influx of hundreds of thousands of migrants from their neighbour.

Brazil also announced that it would double its troops to patrol frontier regions, and would start relocating Venezuelans to towns and cities in its interior.

This is a humanitarian drama. Venezuelans are being expelled from their country by hunger and the lack of jobs and medicine; we are here to bring federal government help and strengthen the border.

Both countries said they would take measures to count the number of Venezuelan migrants – Brazil through a census and Colombia through a registry – many of whom have entered their territory after fleeing a major economic and political crisis.

An estimated 550,000 people have arrived in Colombia without papers, and that number could reach one million by July, according to official forecasts.

Suely Campos, the governor of Roraima, said in a statement that the state “has endured alone” an “unprecedented humanitarian crisis” in Brazil.

“In education, the demand … has increased 100 percent, in health … only in maternity, five Venezuelan babies are born every day,” she added.

“The Venezuelans are being expelled from their country by hunger and the lack of jobs and medicine,” he told reporters after seeing local officials in northern Brazil. “We are here to bring federal government help and strengthen the border.”

Meanwhile, Colombian health services have vaccinated more than 112,000 people and treated more than 23,000 children, according to local reports.

About 10,000 children have entered public schools,

“Colombia has never before experienced a situation like this,” Santos said during a visit to Cucuta.

“I want to repeat to [Venezuelan] President [Nicolas] Maduro: this is the result of your policies … and it’s the result of your refusal to receive humanitarian aid, which has been offered, not just from Colombia but from the international community,” Santos said.

However, he also made a call against xenophobic and hostile behaviour.

Amid this crisis, the Venezuelan government announced a presidential election would take place on April 22.

The election will allow Venezuelans to “freely decide their fate”, Tibisay Lucena, the president of the country’s electoral commission, said.

“We are committed, as always, to our constitutional task, to guarantee the right conditions so that democratic differences are settled through an efficient, transparent and balanced vote.”

The announcement came after no deal was reached in talks in the Dominican Republic between Maduro’s government and an opposition coalition.

The opposition had lobbied for the elections to be delayed until later in the year to give it more time to choose a candidate since its top two leaders are barred from running. 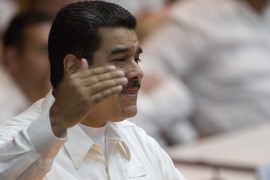