Chinese state-run media on Friday condemned the arrest in Canada of a top executive of telecoms giant Huawei on a US extradition request as a “despicable rogue’s approach” to contain China’s hi-tech ambitions.

Meng Wanzou’s arrest follows a US probe into the company’s alleged violations of Iran sanctions. She faces a bail hearing in Canada later on Friday.

The arrest of Meng, chief financial officer and daughter of the company’s founder, has angered the Chinese government and raised concerns that it could disrupt a trade war truce between the world’s two biggest economies.

Canada defended the arrest on Thursday, saying there was no political motivation, and a senior adviser to US President Donald Trump denied it was linked to US-China trade talks.

But Chinese media cast the move as an assault on the development of the country’s hi-tech industry.

“The Chinese government should seriously mull over the US tendency to abuse legal procedures to suppress China’s high-tech enterprises,” said the nationalist tabloid Global Times in an editorial.

“Obviously, Washington is resorting to a despicable rogue’s approach as it cannot stop Huawei’s 5G advance in the market,” it said.

The China Daily warned that “containing Huawei’s expansion is detrimental to China-US ties”.

US authorities have not disclosed the charges Meng faces following a publication ban she sought.

But “one thing that is undoubtedly true and proven is the US is trying to do whatever it can to contain Huawei’s expansion in the world, simply because the company is the point man for China’s competitive technology companies,” China Daily said.

If granted bail on Friday, Meng will likely have to post bail with “a surety of several million dollars”, Vancouver lawyer Gary Botting, who has experience with extradition cases, said. She would also have to give up her passport, he said.

She could also be fitted with electronic monitoring equipment and the court could go so far as to order security to monitor her while she awaits a decision on extradition, lawyers said.

If Meng fights extradition, her case could go on for years, lawyers said, pointing to examples like Lai Changxing, a Chinese businessman who fled to Canada after he was implicated in a bribery case and fought extradition to China for 12 years.

If she chooses not to fight, she could be in the US within weeks, experts said.

At the heart of the Meng’s detention is the debate about China’s use of advanced technology to enhance its IT industry that rivals the US’s.

Though China’s technology sector is still reliant on certain US exports like microchips, Beijing wants to transform the country into a global tech leader – with a technological prowess rivalling the US – in a plan dubbed “Made in China 2025”.

Huawei is one of the world’s largest telecommunications equipment and services providers. Its products are used by carriers around the world, including in Europe and Africa.

But its US business has been tightly constrained by worries it could undermine American competitors and that its mobile phones and networking equipment, used widely in other countries, could provide Beijing with avenues for espionage.

Australia, New Zealand and the United Kingdom have followed suit this year by rejecting some of the company’s services over security concerns.

Japan too plans to ban government use of telecom products made by Huawei and Chinese tech firm ZTE, reported Japanese media Yomiuri Shimbun on Friday.

Some users viewed the incident as part of the trade war – and a broader conspiracy to keep down China’s technological development.

“One of the most important reasons why the US started the trade war was to attack China’s technology sector and its ‘Made in China 2025’ plan,” wrote one Weibo user.

The goal is to keep China stuck in “low-end industries and force China into the middle-income trap”.

The detention of Meng appears to be a “game of politics”, wrote another user.

Earlier this year, ZTE nearly collapsed after Washington banned US companies from selling crucial hardware and software components to it for seven years, though the ban was lifted after it agreed to pay a $1bn.

Some analysts say Meng’s arrest could be used as a bargaining chip, but White House trade adviser Peter Navarro denied it was linked the US-China trade negotiations.

But CNN, quoting an unnamed official, said that the US saw the arrest as providing leverage in trade talks.

“I can assure everyone that we are a country (with) an independent judiciary,” Trudeau told a tech conference in Montreal.

Trump’s national security adviser, John Bolton, said he knew that Canada was planning to arrest Meng, but he declined to discuss specifics of the case. 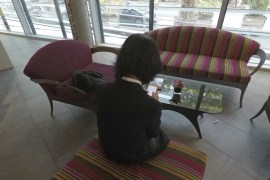 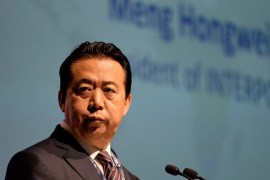 The agency has officially asked China for information about the disappearance of the Meng Hongwei on a trip to China. 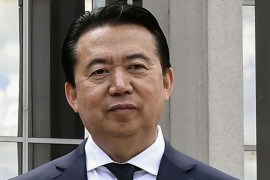