Rimbo, Sweden – The UN’s special envoy has appealed to Yemen’s warring sides to “act now” for the future of the country, as representatives from the government and Houthi rebels gathered for UN-sponsored peace talks in Sweden.

“Yemen’s future is in the hands of those in this room,” Martin Griffiths, the UN special envoy for Yemen said on Thursday in opening remarks at talks aimed at ending more than three years of war.

“We must act now before we lose control of the future of Yemen,” he said.

“Both parties have called for a de-escalation, which is an important backdrop to these talks. This is a show of serious intent.”

For only the second time since the conflict began, officials from President Abd-Rabbu Mansour Hadi’s government and representatives from the Houthi rebel movement joined the talks aimed at discussing ways to end the fighting that has killed an estimated 56,000 people and left a staggering 22 million needing humanitarian assistance.

The UN special envoy is seeking to introduce a set of confidence-building measures at the talks in Rimbo, a town around 50km north of the Swedish capital Stockholm, that will eventually pave the way for future negotiations.

“I am also pleased to announce the signing of an agreement on prisoners, those that have been forcibly detained,” Griffiths said.

“It will allow thousands of families to be reunited.

“What will we do here and in the coming weeks is to work on the implementation of this.”

While the warring sides will not meet face-to-face, the confidence-building measures may include negotiating a ceasefire in the port city of Hodeidah, large-scale prisoner swaps, the reopening of Sanaa international airport and the payment of salaries to civil servants in Houthi-held areas.

Swedish Foreign Minister Margot Wallstrom said the talks can be “an important beginning”.

“It is up to you, the warring parties, to engage in constructive talks with each other and Martin [Griffiths]. What is needed are concessions, compromises and courage,” she said.

But Yemen Foreign Minister Khaled al-Yamani gave little indication that he was going to offer concessions to his rivals.

He rejected a Houthi proposal to form a presidential council without President Hadi as “nonsense”.

“They should withdraw from the institutions of the state and hand them back to the legitimate government. Other than that, there will be no peace,” he told Al Jazeera.

“They should respect the will of the international community and surrender their arms and ammunition and missiles.

“Other than that, there will be no settlement, no solution.”

Yemen’s warring sides have arrived for peace talks in Sweden.

Both sides have given each other glaring looks. Hopefully the talks will be better than the introductions @AJEnglish pic.twitter.com/ijLHWqkz0k

Earlier this week, Saudi Arabia and the United Arab Emirates (UAE) allowed 50 wounded Houthi rebels to be transferred to neighbouring Oman for medical treatment as part of the confidence-building measures.

A Saudi-led coalition – of which the UAE is a member – has been carrying out a deadly military offensive against the Houthis since March 2015, months after the Iranian-aligned rebels toppled the internationally-backed government of President Hadi.

On Tuesday, Yemen’s government said it agreed to a large-scale prisoner swap with the Houthis, with reports suggesting as many as 2,000 pro-government forces could be exchanged for 1,500 Houthis.

“We have signed a prisoner swap and we look forward to [implementing] it,” the Yemeni foreign minister told Al Jazeera.

Mohammad Abdul Salam, the head of the Houthi delegation, told Al Jazeera that the rebels were pleased with the announcement.

“We have been wanting this from the beginning, and this is a significant step going forward.”

Peace can only be reached if the Saudis, Emiratis and Iranians stop intervening in Yemen's affairs

Tawakkol Karman, a Yemeni activist and co-recipient of the 2011 Nobel Peace Prize

‘Heading in the right direction’

The Houthis have told Al Jazeera they are committed to the talks and are willing to hand over the strategic port of Hodeidah to the UN. Hodeidah is a lifeline for humanitarian supplies for the country’s war-wracked population.

The rebels have also promised to end all drone and missile attacks on Saudi Arabia and the UAE, in return for the alliance ending its air attacks.

Peter Salisbury, a Yemen analyst and consultant at the International Crisis Group, said the talks “appeared to be heading in the right direction”.

“The best case scenario is a broad agreement on these confidence-building measures, this includes something positive on Hodeidah that will stave off the battle for the port and city, and an agreement to meet sometime later for future talks”.

Following months of deadly battles in the strategic port city, the Saudi-UAE alliance, which backs the Yemeni government, and Iran, which supposedly supports the Houthis, have agreed that there can only be a political solution to the conflict.

“While the process does appear to be moving in the right direction, the odds are in favour of a negative outcome,” Salisbury said.

Shortly before the talks were due to commence, the Yemeni government demanded that the rebels fully withdraw from Hodeidah, whereas the Houthis threatened to shut down Sanaa airport unless their demands were met.

Tawakkol Karman, a Yemeni activist and co-recipient of the 2011 Nobel Peace Prize, said: “Peace can only be reached if the Saudis, Emiratis and Iranians stop intervening in Yemen’s affairs.”

“This intervention has harmed Yemen and increased the suffering of ordinary Yemenis,” she said.

“Unless this negative intervention is reduced, Yemenis will not be able to reach a political agreement that preserves the country’s sovereignty.”

International pressure to end the war has mounted since the killing of Jamal Khashoggi, a critic of the Saudi crown prince, in October by Saudi nationals in the country’s consulate in Istanbul, Turkey.

Western powers have expressed their anger over the killing, with countries such as Germany and Norway suspending arms exports to Saudi Arabia and senators in the US questioning Washington’s strategic partnership with Riyadh.

Abdul Malik al-Ajri, a member of the Houthi delegation, told Al Jazeera that the rebels were hoping the consultations would eventually lead to an “inclusive political dialogue”.

“We are hoping these negotiations will help end the war,” al-Ajri said.

On Tuesday, Ethiopia’s Prime Minister Abiy Ahmed urged the rival sides to embrace dialogue, saying the war had only brought destruction to Yemenis.

“You should agree and disagree without bloodshed and wars as the people of one home,” Ahmed said in a statement.

“Plan your growth and progress, and keep up with the civilisation that you were once at the forefront of.”

Saudi Arabia led a coalition that launched a massive aerial campaign against the rebels in March 2015, aimed at restoring the Hadi’s government.

Since then, the US has been helping the coalition, which now primarily consists of Saudi Arabia and the UAE, with weaponry and logistical support.

Until recently, Washington was also refuelling the alliance’s planes, which were responsible for the more than 18,000 raids carried out on the country.

According to the Yemen Data Project, almost one-third of all of those bombing missions struck non-military sites.

Residents in the Yemeni capital urged the warring sides to put aside their differences, saying the country had reached a precipice and “Yemenis could no longer wait”.

Hamid Sharaf Ali, a school security guard, told Al Jazeera: “The warring parties need to put aside their partisan and personal gains and seek good for Yemen and the Yemeni people.” 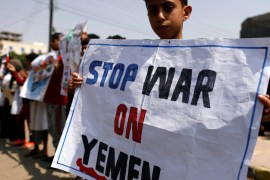 All you need to know about the Yemen peace talks

As some of the key players in Yemen’s war meet in Sweden, is peace finally within reach? 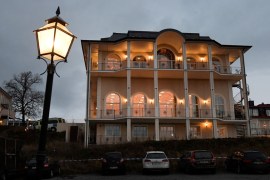 After nearly four years of fighting, both sides in the war in Yemen appear ready to end the conflict. 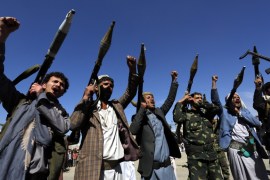 Houthis: Only a political solution can end the war in Yemen

Abdul Malik al-Ajri says the rebels want a land, sea and air blockade on Yemen to be lifted at upcoming talks in Sweden.