Torrential rain has brought much of Libya’s second city of Benghazi to a standstill, closing major roads and shutting its airport.

Water flooded the passenger terminal and parts of the car park at Benina airport on Wednesday.

Osama Alfargany, Benina Aiport’s vice president, told Reuters news agency that “the water came all the way into the passenger halls, which was approximately one to one and a half metres high.”

The airport ”took the necessary procedures and halted all flights temporarily as well as taking all safety and security measures including disconnecting the airport’s power supply,” he added.

Benghazi’s Benina airport had only been renovated and reopened in 2017 following a three-year closure during which military forces were fighting armed groups.

Oil exports were also suspended during the severe weather on Wednesday, as violent waves made the docking of tankers impossible.

Authorities in eastern Libya announced a two-day holiday on Wednesday, as most public workers were unable to reach their offices.

More heavy rain is expected to hit the country on Friday night, but this will mostly affect the west region, including Tripoli. 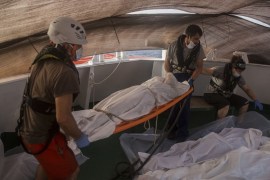 At least 14 dead on refugee boat off Libya: Official

Police say wooden boat was found off Misrata with two bodies on board, adding that 12 others were thrown into the sea. 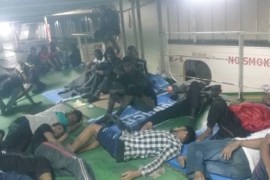 More than 90 refugees and migrants refused to leave rescue ship in a standoff that lasted 10 days. 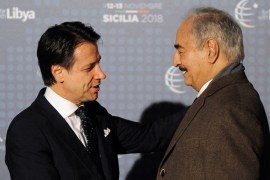 Haftar hints at peace with rival until election in Libya