Following the 2016 referendum on Britain’s European Union membership, during which 52 percent of voters opted in favour of leaving the 28-member bloc, Brexit has dominated public life and political discourse in the United Kingdom.

With another landmark vote on Tuesday (December 11), further debate and renewed rounds of negotiations on the horizon, it appears set to carry on doing so for some time yet.

If MPs back the plan by Prime Minister Theresa May’s Conservative government, then an EU Withdrawal Agreement bill will be introduced in parliament. It must be ratified before it can proceed to a European Parliament vote before receiving EU Council approval.

But if parliament rejects her plan, the government will have 21 days to decide its next move. In this scenario, major political chaos is expected.

Al Jazeera looks at the key dates and possible hurdles ahead for the UK’s departure from the EU. 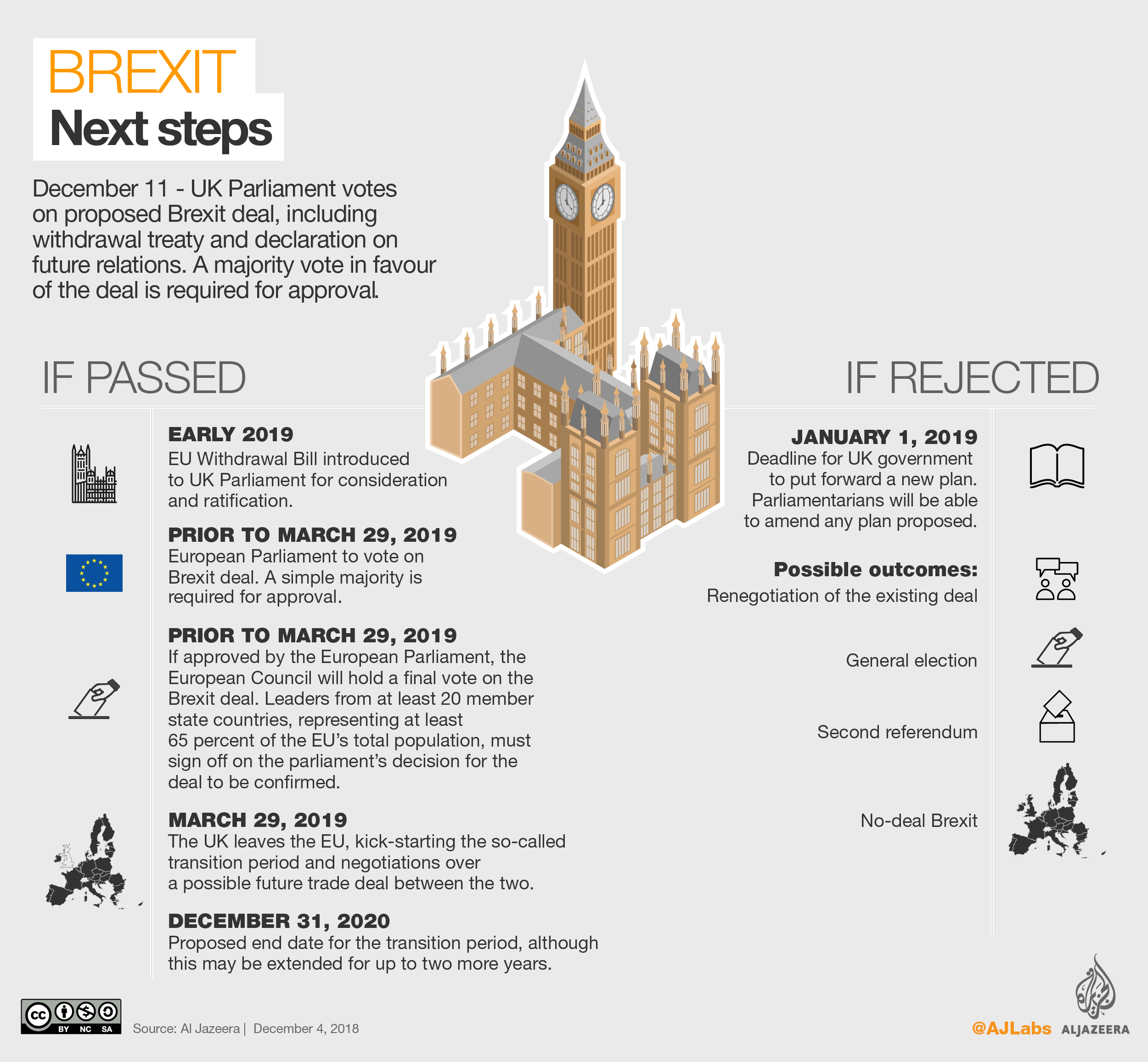 The 585-page draft withdrawal agreement includes provisions on citizens’ rights, the transition period and the so-called backstop arrangement concerning the Irish border, among other things.

Opposition to the deal is fierce, with critics from across the political spectrum, including within her own party, publicly declaring they will reject it during the parliamentary ballot.

May requires a majority vote in support of the deal in order to introduce a formal EU Withdrawal Agreement Bill to parliament for consideration and ratification in early 2019.

Majority opposition, however, will force the government to put forward a new plan within 21 days. Parliamentarians will have the right to amend any such motion.

A vote against May on December 11 could lead to a renegotiation of the existing deal, general election, second referendum or no-deal Brexit.

The leaders of all 28 EU member states will meet in Brussels for a European Council summit.

The UK’s withdrawal from the bloc has not been included as a topic of discussion within a draft agenda published in advance of the meeting, but if May loses the December 11 parliamentary vote, emergency Brexit discussions could take place.

An EU Withdrawal Agreement Bill will be introduced to parliament for consideration and ratification. Political battles over possible amendments to the bill may take place.

European parliament to vote on Brexit deal, provided it has been passed by Bitish parliament. A simple majority is required for approval.

Following this vote, the European Council will make a final decision on the Brexit deal.

Leaders from at least 20 member state countries, representing 65 percent of the EU’s total membership, must vote in favour for it to be confirmed.

The UK leaves the EU, kick-starting the so-called transition period and negotiations over a possible future trade deal between the two. EU law prevents such talks from taking place while the UK is still a member state.

Proposed end date for the transition period. This may be extended, however, according to the draft withdrawal agreement.

If no trade deal is reached by the end of this period, the so-called backstop arrangement will kick in to ensure there is no hard border between Northern Ireland, a constituent part of the UK, and the Republic of Ireland, an EU member state.