A secular icon who drafted Bangladesh’s constitution has emerged as the face of an embattled opposition seeking to end the decade-long rule of Prime Minister Sheikh Hasina, who has been accused of authoritarianism.

In a general election due at the end of this month, Hasina’s ruling Awami League (AL) will be fighting to retain power against a new alliance led by Kamal Hossain, an Oxford-educated international jurist and a former foreign minister, whom Hasina grew up calling “kaka”, or uncle.

The BNP is hoping the alliance will help boost its support and move on after a series of setbacks, including the jailing of its leader former Prime Minister of Bangladesh Khaleda Zia for corruption in February and the sentencing of exiled acting leader, her son, in October.

“Our [of Jatyio Oikya Front] goal is the same, to free the country of tyranny,” he told Al Jazeera.

The octogenarian – a former comrade of Hasina’s father in the country’s independence struggle – says his decision to forge an alliance with the BNP was critical to restoring democracy in the country.

Hasina, the daughter of independence hero Sheikh Mujibur Rahman, is the longest-serving leader in its short history.

She began a second straight term in power in 2014 after an election boycotted by the BNP and shunned by international observers, with more than half the seats uncontested.

“What has happened in the last five years is unprecedented,” Hossain told Reuters news agency. “We have never had a government for five years that was unelected.”

Hasina and BNP chief Zia share a long and bitter rivalry and have alternated in power for most of the past three decades.

Siding with the BNP, though, sets Hossain up as a target for Hasina. The BNP has ties with the banned Islamist party Jamaat-e-Islami, which opposed independence from Pakistan in 1971 and several of whose members have been sentenced to death for committing war crimes.

Days after the new coalition was announced, Hasina declared that Hossain had “joined hands with killers”.

Jamaat has since been banned from participating in the elections, but analysts say many of its cadres are likely to back the BNP candidates.

“The Oikya Front is not a political alliance, rather it is an alliance of war criminals and militants who don’t believe in the democratisation of the country,” Khan told Al Jazeera.

He said the people of the country haven’t forgotten the last BNP-Jamaat government from 2001-2006.

“The country was a failed state back then.”

Hossain admitted some of the mistakes committed by the BNP in the past.

“Yes, the BNP did a lot of things I never appreciate,” said Hossain. “They injected a degree of communalism into politics, which is very regrettable.”

But he said the coalition would be secular and have nothing to do with groups such as Jamaat.

Analysts have raised doubts about the future of the coalition as its main constituents come from different ideological backgrounds. Also, there is no clarity on who will be the prime minister if the alliance wins the polls.

When asked who will be the “prime minister” if Oikya Front emerges victorious, BNP’s Ahmed said: “It’s a strategic decision which we, at this point, haven’t decided yet.”

“Hossain has already talked about the draft election manifesto of Oikya Front. All I can say that we don’t believe in the centralisation of power any more,” he said.

He also said if elected, they would ensure that “the same person could not be the prime minister for more than two terms consecutively.”

The BNP’s participation in the general election scheduled for December 30 was in doubt until last month, when it announced the formation of the new alliance, helmed by Hossain, who runs a group called Gano Forum, or People’s Forum.

The AL said that the BNP was trying to use Hossain’s reputation to get back to power, but added that “it will fail miserably”.

AL Joint Secretary-General Mahbubul Alam Hanif said Hossain’s party Gono Forum had never managed to secure a seat in the parliament. “It proves he is not a people’s person and his party doesn’t have the support of a large population.”

Hossain walks with a stick and says he is not seeking to become prime minister as he is too old.

But some in the coalition, he said, privately compare him with Mahathir Mohamad, the Malaysian prime minister who took power at the age of 92 in May, after defeating a predecessor mired in corruption allegations.

“Maybe his health is better than mine,” quipped Hossain.

Some political analysts predict a strong anti-incumbency sentiment in the election.

Besides detaining scores of opposition members on charges the BNP terms politically motivated, Hasina’s government has also gone after critics such as prominent photographer Shahidul Alam, who was arrested for comments he made on social media.

Hasina has introduced laws that rights groups say give her sweeping powers to go after dissenters and gag the media.

The veteran leader called them a “preplanned effort” to create “not even a one-party state, but a one-person state.”

“The real danger of having an authoritarian government like the present one is, God forbid if it survives the next election, many of us will not be able to remain in the country,” said Hossain in reference to his fears that critics will be targeted by the government.

The AL has denied trying to curb free speech or media freedom and called cases filed against BNP members legitimate.

Hossain was born to a physician father under British rule in what is now Kolkata in eastern India. That was before the division into India and Pakistan, out of which Bangladesh was carved following a war in 1971.

He was jailed alongside Hasina’s father and later served him as the country’s first law minister.

He went on to work in various roles at the United Nationsafter quitting the AL in the early 1990s to form the rival People’s Forum.

BNP insiders say his international standing and image as a freedom fighter were reasons behind bringing him into front the alliance.

But some question whether Hossain has the characteristics needed for the uglier side of Bangladeshi politics.

“He is not a rebellious leader, he is a classic constitutional lawyer,” said Shahdeen Malik, a Supreme Court advocate and a professional acquaintance. “Intuitively, he would do things by the book, and in our politics that can be a disadvantage – that to me is his main weakness.”

Political analyst Afsan Chowdhury told Al Jazeera that Hossain’s association with the alliance will benefit the BNP. “I don’t know how much it will improve BNP’s vote bank but it certainly has uplifted BNP’s image,” he said.

Chowdhury said amid the incarceration of Zia, the BNP lacked a guardian to lead the election. “So after aligning with Hossain, the BNP has got a formidable leadership.” 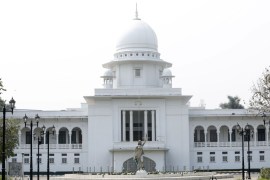 Bangladesh: Ex-chief justice alleges he was ‘forced’ to resign’

In his memoir Surendra Kumar Sinha, who now lives in Canada, details the circumstances that led to his resignation.