At least 22 people have died after heavy rains brought about by a tropical weather system that hit the Philippines on Saturday, causing flash floods and landslides.

According to news reports, three people were killed in a landslide in the City of Legazpi, Albay province, and hundreds of families were evacuated to higher grounds in Sorsogon province after a tropical depression brought heavy rains.

In Catarman, the capital of Northern Samar province, 438mm rainfall was recorded in 24 hours, including a six-hour spell which saw 270mm rainfall.

The tropical depression, locally known as Usman, displaced 4,900 people in the central Philippines, according to the National Disaster Risk Reduction and Management Council.

Video obtained by Reuters news agency showed flooding on streets in Daet, in Luzon, and a collapsed house close to the edge of a flooded river.

The Philippine Coastguard said that more than 20,000 passengers were stranded at different ports across the country.

A final warning has now been issued for Usman as the winds are quickly dying down. The rain is beginning to ease as it heads towards southern Vietnam.

Further showers are likely across northern Luzon into the New Year as a legacy of showers trail behind the main system. 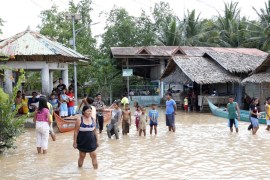 Death toll from the effects of Tropical Storm Tembin was made worse by human activity. 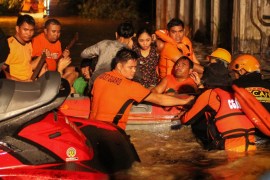