Kinshasa, DRC – Democratic Republic of the Congo (DRC) is heading to the polls on Sunday in long-delayed elections, two years after they were first scheduled to be held.

There were only small queues of voters in the capital, Kinshasa, as heavy rain kept many from casting their ballot in the early hours of the election.

After casting his vote in Bumbu municipality in the capital, Peter Ekoto, 47, told Al Jazeera that the voting procedure was straightforward.

“It was an easy process. I thought it will be a complicated but it was not. It took me less than a minute. This election is the quickest and the most smooth I have seen,” Ekoto, a humanitarian worker, said as heavy rain poured down.

More than 46 million Congolese have registered to elect the successor to President Joseph Kabila, who has ruled the central African country for 17 years.

As many as 21 candidates are competing to succeed Kabila, who came to power following the assassination of his father in 2001.

The outgoing president, his chosen successor Emmanuel Ramazani Shadary, and leading opposition candidate Martin Fayulu all cast their ballots in the same polling station in Kinshasa.

Shadary said he was “confident of a victory in this election”.

“As of tonight, I am certain that I will be the president of the republic,” he told reporters.

“By this vote, we sign not only the end of the misery of the Congolese people, but also the insecurity of our people. We aspire to change and it is that change we must bring through this election,” he added.

The electoral commission said official results of the presidential poll will be announced on January 15.

In Kinshasa, home to four million voters, 20 percent of the polling stations did not open due to a lack of electronic voting machines.

Earlier this month, one of the electoral commission’s main warehouses in the city was burned down, destroying more than two-thirds of the voting machines allocated for the city.

Sunday’s vote marks the first time electronic voting systems are being used, and some opposition figures and international observers have expressed concern, saying the machines are more vulnerable to vote-rigging than traditional ballots.

Micheline Kabund, a 47-year-old teacher, said she found the machines easy to use.

“But I don’t know what is inside the machine. If the result comes out like we voted then change will come. I hope the machines are not manipulated,” she said at a voting centre in Kinshasa’s Bumbu district.

Meanwhile, Blandine Kiemba, also a teacher, said electronic voting would be “complicated and difficult” for those who do not know how to read or use a computer.

“The machine is quick and easy to use if you know how to read,” she said.

In Bumbu, only 10 out 12 polling stations had opened, and more than a dozen voters said they were unable to vote because they could not find their names on the register.

Aristote Zenga, a 25-year-old driver, said he had registered to vote but could not find his name on the voters’ lists.

“I’m feeling very bad about this,” he said. “It is my first time trying to vote.”

Voting is not taking place in at least three cities, where more than one million registered voters live.

Last Wednesday, the electoral commission (CENI) said it postponed the presidential and parliamentary polls in the three cities because of concerns over Ebola outbreak and ethnic violence.

Voting in Beni and Betumbo in the eastern North Kivu province has been delayed until March next year, due to the ongoing Ebola outbreak which has killed more than 330 people.

Voting in the western city of Yumbi in Bandundu province will also take place in March next year owing to ethnic violence that claimed the lives of at least 100 people this month.

The DRC, a country of more than 80 million people, has not seen a peaceful transition of power since it gained independence from Belgium in 1960. 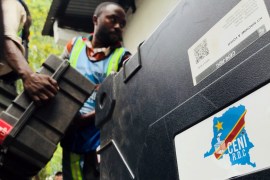 DRC presidential election: What you should know

Voters in the DRC will head to the polls on Sunday to choose a successor to long-time President Joseph Kabila. 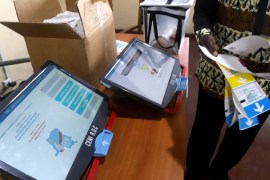 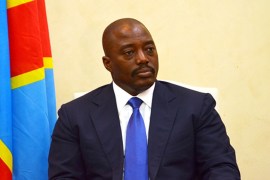 DRC: What is Joseph Kabila’s legacy after 18 years in power?

As the country heads to the much-delayed election, questions over the 47-year-old leader’s long rule cast a shadow.