Dhaka, Bangladesh – Millions of Bangladeshis voted on Sunday to elect a new parliament amid reports that at least 10 people were killed in deadly clashes between supporters and opponents of the country’s ruling party.

Prime Minister Sheikh Hasina, who is seeking a third straight term in power, cast her ballot in the capital, Dhaka, earlier in the day.

“We believe in democracy and we will accept the people’s mandate,” Hasina said.

More than 104 million people were registered to vote in the elections to choose 299 representatives to parliament, known as the Jatiya Sangsad.

Around 600,000 security personnel, including soldiers, were deployed across the country in a bid to prevent violence following a bloody campaign.

But on Sunday, at least 10 people were killed in clashes, according to the leading Bengali-language daily, Prothom Alo.

The Daily Star, a popular English daily, put the figure at 12. Al Jazeera is awaiting a response from the police.

Meanwhile, mobile internet has been completely shut down until midnight of Sunday to prevent “rumours” that could trigger unrest, the Daily Star reported.

Despite the reports of deadly clashes, Abdul Malik, secretary at the Ministry of Information, said the election was held “peacefully and successfully”.

In Dhaka’s Badda area, Mohammad Shanto, a first-time voter who was waiting to cast his vote, told Al Jazeera he felt safe and hoped to be able to cast his vote without any problems.

Jahidul Islam, an AL member, said voting was taking place in Badda in a “festive” atmosphere.

“Badda is a strong base of Awami League. We hope we will win,” he said.

In the Dhaka 1 constituency in the capital, independent candidate Salma Islam announced she was withdrawing from the race, saying her representatives at the polling stations had been driven out from the centres.

The BNP, meanwhile, complained that its agents were obstructed in some 221 constituencies, the Daily Star reported.

Voting in one constituency was also suspended due to the death of a candidate.

A group of 16 human rights organisations criticised the government on Saturday for “cracking down on civil society, the opposition and the media”.

At least five people have been killed and 2,682 others injured in election-related violence since December 10, according to the group, which includes the Asian Human Rights Commission and Asian Network for Free Elections (ANFREL).

“These attacks are meant to instil fear in the minds of Bangladeshi voters, and thus undermining the prospects of a level electoral playing field,” the group said in a statement.

Golam Mawla Rony, a BNP candidate in the polls, said he has been confined to his house by ruling party members.

Rony, who is contesting the southern Patuakhali 3 constituency, said he was attacked by AL members when he ventured out for prayers on Friday.

“One hundred of my supporters have been arrested. Police and Awami League people are going from house to house and threatening BNP supporters to not come out on Sunday to vote,” Rony told Al Jazeera over the phone.

“The situation is terrifying. I could never imagine that such a situation can exist during an election,” Rony added.

“If we find any negligence or insincerity during poll-time duty, we will take legal action against them after investigation,” Huda said during a press conference at his office in Dhaka.

A total of 160 foreign observers will observe Sunday’s polls, alongside 25,900 local monitors and journalists, the elections commission said.

Gowher Rizvi, an adviser to Hasina, said the opposition’s claims of police harassment and restrictions on their movement were “exaggerated”.

“It’s despicable. It’s really worrying that there is violence. But if you look at the last seven days, seven people have been killed – all from Awami League. This is real violence, people have lost their lives,” he told Al Jazeera.

Asking the media to investigate the opposition’s claims, he said: “Yes, there are some isolated incidents, I have no doubt. It has happened in the past, it’s happening now. But do not accept it without corroboration.”

Afsan Chowdhury, a political analyst and journalist, said Bangladesh has not seen “such a conflict-ridden election before”.

“Interestingly, this is the first election under a civilian government in 18 years, since the 2008 election was under martial law and the 2014 election was boycotted by the opposition,” he added.

Hasina, who has become the South Asian nation’s longest-serving leader, is seeking re-election on the back of high economic growth during her 10-year rule.

“I request the voters to cast their votes … All the people will have to watch out so that no one can make the elections questionable in any way,” Hasina was quoted as saying by the Daily Star.

Hasina has led the ruling AL since 1981. The party was established by her father and the country’s founding President Sheikh Mujibur Rahman.

She was praised globally last year for her handling of the Rohingya crisis, when nearly one million people fleeing a military crackdown in Myanmar sought refuge in Bangladesh.

Chowdhury, the analyst who also teaches at BRAC University, said Hasina’s achievements were “quite extensive”.

“Nobody has achieved as much as she has done. She has carried out socioeconomic development,” he said. “The lower class has benefited most under her. This is her great power base and that has not changed.”

“BNP’s support base is those that are unhappy with the Awami League. It is the anti-incumbency party. It does not have its own support base. Not a significant one,” he said.

The opposition fight was no match to the high-decibel campaign led by the ruling AL party in the absence of the BNP leader and former Prime Minister, Khaleda Zia, who is serving a 17-year jail term for corruption.

Her BNP forged an alliance, Jatiya Oikya Front (National Unity Front), with a former Hasina ally and a well-respected jurist, Kamal Hossain, to mount a challenge to the prime minister.

On the eve of the elections, Hossain had called on his supporters not to be intimidated by threats.

“Vote tomorrow. Don’t let them intimidate you. Evil forces will flee before you. They can’t fight people’s strength,” said Hossain. 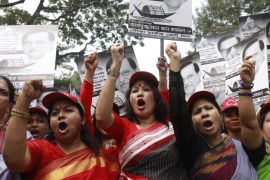 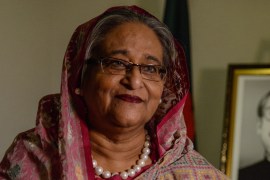 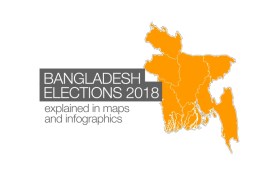