Parts of Istanbul were brought to a standstill on Tuesday morning as a Christmas Day storm lashed parts of northwest Turkey with heavy rain and strong winds.

Transportation systems operating across both sides of the Bosphorus were badly hit and ferry services were forced to shut down for a time during the storm.

Some districts on the outskirts of the city also had a covering of snow. These caused severe delays at Istanbul’s Ataturk International Airport.

The rain readily changed to snow in the mountains of northwest Turkey into Wednesday morning, leading to slick travelling conditions.

Ankara had a good covering of snow as temperatures struggled to get above freezing point. The cold air will remain in place, but drier, clearer weather is expected as we head towards the weekend.

The crisp conditions will lead to icy stretches and travellers have been advised to allow extra time for their journeys.

There was also some disruption on the roads. No fewer than nine villages in the southeastern province of Siirt were cut off due to heavy snowfall.

The line of heavy snow and rain will cause further problems across the eastern third of the country throughout Wednesday into Thursday.

There could be as much as 40-50cm of snow over the highest ground which is enough to cut off some rural communities. Meanwhile, heavy rain to the south could lead to flash flooding.

The system then threatens to bring flooding concerns into Cyprus, Syria and Lebanon by the end of the week. 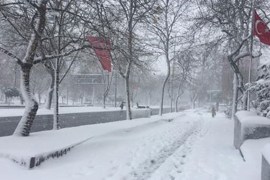 Winter digs in across Central and Eastern Europe

Snow storms and blizzards cause travel chaos across Italy, the Balkans and much of Turkey. 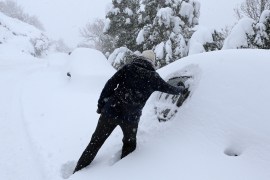 Much of southern Europe is experiencing its second round of snow in just under two weeks.