A large winter storm is expected to disrupt millions of holiday travellers across the eastern seaboard on Friday and Saturday.

Severe storms swept across Florida on Thursday morning, triggering at least 3 tornadoes and dozens of reports of wind damage, as a result of the storm’s straight-line winds.

In Pasco County, 70 homes were damaged, 25 of those sustaining moderate to major damage.

At least one person was seriously injured. Ninety-year-old Marie Weddle was struck in the head when her condominium roof collapsed.

All three tornadoes were rated at EF-0, which is the lowest on the tornado intensity scale, but significant enough to cause widespread damage with the strong winds.

The storms also brought flooding rains to parts of central Florida. Orlando, the home of Disney World and Universal Studios, received over 76 millimetres of rain, while the coastal city of Sarasota received over 100mm.

Florida receives an average of 1.8 tornadoes during the month of December.

The strong storm responsible for Florida’s severe weather is now moving up the eastern seaboard.

Flooding rains are expected on Friday from Virginia to New Hampshire, while heavy snow on the colder backside of the storm is forecast across the northern Appalachian Mountain range from New York to Maine.

These storms are likely to bring delays on the roads and at airports as millions of people travel for the holiday week. 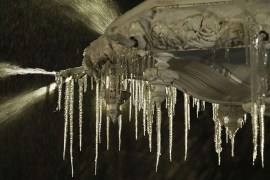 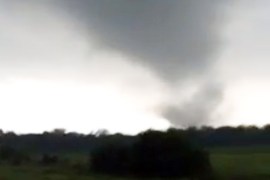 Severe storms kill at least 14 people in US

Tornadoes and flooding kill at least 14 as dangerous weather hammered parts of the midwest and the south. 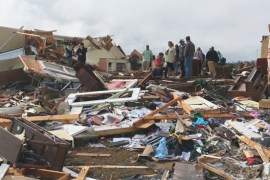 President Donald Trump pledges help as state of emergency is declared in some areas due to severe weather.