A covert US-backed initiative to improve ties between Saudi Arabia and Israel is facing setbacks after Crown Prince Mohammed bin Salman and two of his aides were implicated in a journalist’s killing, according to the Wall Street Journal.

Prince Mohammed, whom the US Senate blamed for Jamal Khashoggi’s killing in October, spearheaded the outreach to Israel, a longtime foe, the Journal said in a report on Tuesday.

But the global outcry over Khashoggi’s murder in October and fallout within the royal court has diminished the prince’s influence and dampened Saudi Arabia’s appetite for risky foreign policy endeavours, the Journal said, citing people familiar with the matter.

“The last thing the kingdom wants is for this to come out now and cause another backlash.”

Saudi Arabia does not officially recognise Israel and King Salman, who has taken a more active role in government in the aftermath of the Khashoggi crisis, recently described resolving the Israel-Palestine conflict as the kingdom’s “foremost priority” in the region.

The effort to improve Riyadh’s ties with Israel was also hindered, the Journal reported, when two close advisers to Prince Mohammed lost their jobs over their suspected role in Khashoggi’s murder.

Meanwhile, al-Assiri, al-Qahtani’s subordinate, secretly travelled to Israel several times to discuss how Saudi Arabia could benefit from Israeli technology, according to the Journal.

That would make him the most senior Saudi official known to have reportedly set foot in the country.

Despite the setback, the Saudis and Israelis were likely to continue building ties in secret, the Journal said, because of shared business and security interests.

It added that the Saudi government has been considering an investment of at least $100m in various Israeli technology companies and begun issuing a special waiver to Israeli businessmen allowing them to travel to the kingdom on special documents, without using their Israeli passports. 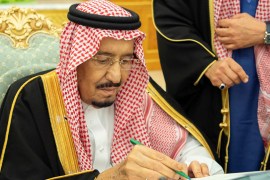 Saudi king extends allowances as biggest budget ever is announced

Government says it will increase spending by more than 7 percent in 2019 to ignite economic growth. 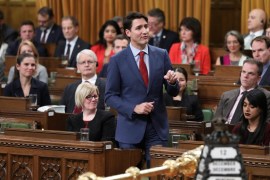 Canadian PM’s comments harden in tone after maintaining there would be huge financial penalty if contract is scrapped.