By Rathindra Kuruwita and Zaheena Rasheed

Colombo, Sri Lanka – Sri Lanka’s disputed Prime Minister Mahinda Rajapaksa has stepped down from his post, signalling an end to a weeks-long political crisis that has kept the Indian Ocean nation without a functional government.

Rajapaksa signed a letter of resignation in front of supporters and journalists at his private residence in the country’s capital, Colombo, on Saturday.

In a subsequent statement, the 73-year-old said he was bowing out to allow President Maithripala Sirisena to “form a new government”.

Sri Lanka has been in crisis since October when the president fired Prime Minister Ranil Wickremesinghe amid a bitter power struggle, and replaced him with Rajapaksa, a popular former president who is accused of corruption and wartime atrocities.

The feud put the country on the path towards a government shutdown with parliament unable to pass spending for 2019 as legislators clashed on the chamber floor – throwing chairs, books, and chilli paste – over who should remain the country’s prime minister.

Wickremesinghe insisted his sacking was illegal, and his United National Party (UNP), which has a majority in the 225-member House, passed two no-confidence motions against Rajapaksa.

But Sirisena ruled out ever reappointing Wickremesinghe and tried to dissolve parliament in a bid to hold new elections.

That attempt was thwarted by the Supreme Court, which on Thursday said the president’s moves to sack the House was unconstitutional.

“Sirisena was misled by some groups who were against our administration. It is because of them that he removed Wickremesinghe,” he said at Temple Trees, the prime minister’s official residence where the deposed leader has remained holed up since the crisis began.

Premadasa said the president would reappoint Wickremesinghe as prime minister on Sunday.

In a subsequent Twitter post, UNP called on supporters to gather in Colombo on Monday to celebrate Wickremesinghe’s reinstatement.

Rajapaksa, in his statement on Saturday, said his coalition will now act as the opposition to Wickremesinghe’s UNP, and lobby the government to hold provincial elections, some of which have been postponed for more than three years.

The former president said he had only taken on the prime minister’s role in the aim of forming an interim government that would oversee the long-delayed polls, as well as new general elections.

“The change of government that the people expected has now had to be put off. But the people will definitely get the change they desire. No one can prevent that,” he added.

The opposition will prevent the passage of a draft new constitution, he said, claiming the charter abolishes the executive powers of the president altogether and proposes devolving power to nine federal provinces.

“We will bring the forces opposed to the country down to their knees by organising the people,” he said.

Rajapaksa, who ended a 26-year-long war against Tamil separatists in 2009, went on to lambast the Tamil National Alliance (TNA), a coalition of 14 legislators who represent the ethnic minority, for backing the UNP in the parliament votes against him.

The Tamil coalition also voted for a resolution declaring the parliament’s support for Wickremesinghe’s reinstatement on Wednesday.

Sagala Ratnayaka, a UNP MP, welcomed Saturday’s development in a Twitter post, saying he was “happy that the fight for democracy yielded results not only for us, but also for generations to come”.

I am not sure how MR @PresRajapaksa can resign from a position that he does not legally hold. The legislature does not recognize him nor does the judiciary. Nevertheless, we're happy that the fight democracy have yielded results not only for us, but also for generations to come.

Shreen Saroor, a human rights activist, said parliament must now immediately turn to passing a state budget for 2019 and avert a government shutdown.

“The crisis has disrupted some essential public services. For example, hospitals in the north and east are running out of supplies,” she said.

“There has to be a vote on accounts, even if its an interim measure.”

The protracted crisis has hit the country’s economy hard, she said, noting its currency – the Sri Lankan rupee – fell to a record low of 177.20 to the dollar in November, while the travel industry, which makes up about five percent of Sri Lanka’s $87bn economy, has also reported cancellations by both business and leisure visitors. 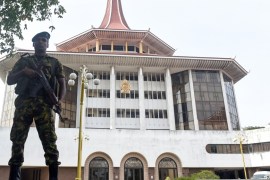 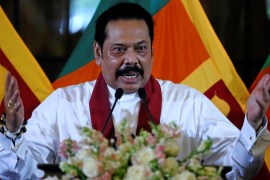 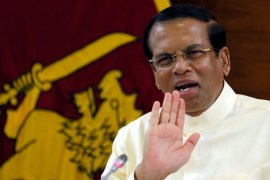 ‘Not in my lifetime’: Sirisena rules out ever restoring ousted PM

In Pictures: Spoons become a new symbol of Palestinian ‘freedom’