Thousands of “yellow vest” protesters took to the streets of French cities on Saturday in the fifth weekend of demonstrations against Emmanuel Macron’s government, ignoring calls to stay home.

Some scuffles broke out on Saturday in central Paris between protesters and police after nearly 4,000 people came out in the capital, raising anti-government slogans and blocking traffic.

About 8,000 police and 14 armoured vehicles were deployed in Paris after similar protests in recent weekends turned violent.

The Interior Minister said around 69,000 police were active on Saturday with a reinforced presence in Toulouse, Bordeaux and Saint-Etienne.

President Macron, facing the biggest crisis of his presidency, announced a series of concessions on Monday to defuse the “yellow vest” movement, which sprang up in rural and small-town France last month.

He was hopeful that the package of tax and minimum wage measures, coupled with bitter winter weather, will help end a month of violent clashes and disruptions.

“Last time, we were here for taxes,” a 28-year-old Jeremy told the AFP news agency as he joined others gathering in freezing cold on the Champs-Elysees.

“This is for the institutions: we want more direct democracy,” he said, adding that people needed to “shout to make themselves heard”.

The “yellow vest” protesters have made dozens of demands, but they have no agreed programme or nominated leaders, making the task of negotiation difficult.

Until now, a clear majority of French people had backed the protests, which began over tax hikes on transport fuel before snowballing into wide opposition to Macron’s pro-business agenda and style of governing.

But two polls published on Tuesday – in the wake of Macron’s concessions – found the country was now split broadly 50-50 on whether the protests should continue.

Al Jazeera’s Andrew Simmons, reporting from the Champs Elysees in Paris, said that there were significantly fewer protesters gathering in the city centre compared to previous weeks.

“The conclusion to it all is that the numbers are dramatically down compared with last week.”

“Even though the numbers aren’t massive, these people, the yellow vests, if you asked right now ‘who has ownership of the Champs Elysees?’, just before Christmas mid-way through a Saturday, well, it’s the yellow vests, isn’t it. That would seem to be the case, because it certainly isn’t Christmas shoppers. Normally the place would be absolutely packed, jammed full of Christmas shoppers. But no, of course, all the major stores are boarded up. It is extraordinary. It is not a situation that has been solved.”

Around 90,000 security personnel were mobilised last Saturday across France and 2,000 people were detained, nearly half of them in Paris.

“That people demonstrate, no problem, but the vandalism is appalling,” Maria, who manages the Le Vin Coeur restaurant near the Arc de Triomphe in Paris told AFP news agency on Saturday morning.

Like thousands of other business and restaurant owners across the capital, she was apprehensive and ready to pull down her shutters and close at the first whiff of tear gas.

Many of the “yellow vest” figureheads, along with the leaders of the far-left Unbowed France party, urged protesters to turn up on Saturday to put pressure on the government into making further concessions.

Others suggested that the small town and rural protesters should show their resolve by rallying in the regions rather than heading for the capital.

France “needs calm, order and to go back to its normal functioning”, Macron said on Friday.

On Thursday, government spokesman Benjamin Griveaux had called on protesters to stay put.

“It would be better if everyone could go about their business calmly on Saturday, before the year-end celebrations with their families, instead of demonstrating and putting our security forces to work once again,” he said.

He was speaking in the wake of an attack on Tuesday in the eastern city of Strasbourg, which left four dead and 12 wounded. 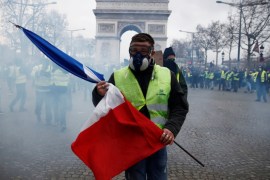 From Brexit to yellow vests, a common thread of economic hardship

Economists say many issues currently plaguing Europe are rooted in policies that pushed citizens to the financial brink. 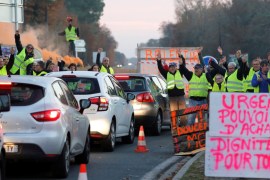 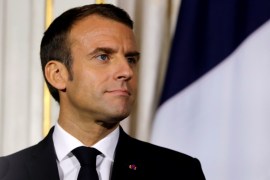