Rimbo, Sweden – Yemen’s warring sides agreed to a ceasefire for the flashpoint city of Hodeidah and its surrounding governorate, a major breakthrough that could end what the UN calls the “world’s worst humanitarian crisis“.

UN Secretary-General Antonio Guterres said on Thursday that the Houthis agreed to withdraw from the strategic western city and relinquish control of three of its ports – Hodeidah, Saleef and Ras Isa – which serve as a major lifeline for more than 18 million Yemenis who live in the rebel-held territory.

As part of the agreement, the ports would fall under the control of “local forces”, who would then send the ports’ revenues to the country’s Central Bank.

The Central bank would then begin paying the salaries of government employees in Houthi-held areas. As many as 1.2 million civil servants have not received their salaries in nearly two years, leaving health, education and sanitation services without the people and resources needed to keep them running.

“The agreements today mean a lot. This can be a starting point for peace and for ending the humanitarian crisis in Yemen,” Guterres told reporters.

“The war in Yemen has gone on for four years. Four devastating years of suffering for the Yemeni people,” he said.

Houthis to withdraw within days

The UN special envoy for Yemen, Martin Griffiths, said that the rebels were expected to withdraw from the port “within days, and then from the city”, with both sides expected to “disengage”.

He added that the ceasefire would “open up the east-west road [that connects Hodeidah and Sanaa] so that a humanitarian pipeline, which is crucial to the people of Yemen, can start delivering aid.”

Following months of deadly battles in the city, a Saudi-UAE alliance, which backs the Yemeni government, and Iran have agreed that there can only be a political solution to the conflict.

For more than a week, representatives from the Yemeni government and Houthis rebels had been holding closed-door discussions with Griffiths in Rimbo aimed at discussing ways to end the conflict that, according to rights groups and monitors, has killed an estimated 60,000 people.

“It is obvious the UN will play an important role in the port, probably a monitoring role and the management of that port,” Guterres said.

He added that the agreement would see the deployment of UN-supervised neutral forces and the establishment of humanitarian corridors which would improve “the living conditions of millions of Yemenis”.

In a highly symbolic gesture, Yemen’s Foreign Minister Khaled al-Yamani shook hands to loud applause with the head of the Houthi delegation, Mohammad Abdul Salam at the end of the conference.

“We depend on the international community, the Red Cross and [the] office of the special envoy to guarantee the implementation of this agreement,” al-Yamani later told Al Jazeera.

“It is now up to the Houthis to prove that they respect international law”.

Abdul Salam told Al Jazeera that the Houthis had signed the agreement in good faith and to were hoping it would avert the country’s “impending famine”.

“We made great concessions for the sake of the Yemeni people because Hodeidah is the last remaining corridor to save the country from this impending famine”.

Without offering details, Guterres told reporters that the two sides had also reached a “mutual understanding” to ease the situation in the city of Taiz.

“This will lead to the opening of humanitarian corridors and the facilitation of goods,” he said.

The Yemeni people ... want to see their leaders, the various Yemeni parties, find a way to end this conflict.

Matthew Tueller, US Ambassador to Yemen

Earlier this week, the opposing sides agreed to terms on a large-scale prisoner swap, with more than 16,000 prisoners expected to be released in the next 30 days.

However, the parties failed to come to an agreement on reopening the Sanaa airport or on economic measures that are vital to helping the country’s impoverished population.

Sources told Al Jazeera that the next round of talks, that is scheduled to be held in late January, would focus on a framework for negotiations on a political process.

Peter Salisbury, a Yemen analyst and consultant at the International Crisis Group, hailed Thursday’s announcements, but said the momentum hadn’t yet “shifted from war to peace”.

“This is welcome news and a step in the right direction but the hard part starts now.

“Turning this agreement into a reality on the ground will be a slog and a lot could go wrong. With luck and a tonne of hard work, this can build into a peace process but the momentum hasn’t yet shifted from war to peace”.

International pressure to end the war has mounted since the murder of Jamal Khashoggi, a Washington Post columnist and critic of Saudi Arabia‘s foreign policy.

Western powers have expressed their outrage over the killing, with senators in the United States questioning Washington’s strategic partnership with Riyadh.

Under the leadership of Saudi Crown Prince Mohammed bin Salman, known as MBS, the de-facto ruler of the kingdom and alleged architect of the war, the Saudi-led coalition has carried out more than 18,000 air raids with weddings, funerals, schools and hospitals not spared from the bombardment.

The US Senate voted on Thursday to end the US involvement in Yemen, but the resolution is likely to run aground in the lower House of Representatives where Republicans hold the majority until January 3.

Matthew Tueller, the US Ambassador to Yemen, refused to answer questions about the Senate vote but said Washington would be working hard to ensure the ceasefire lasts.

“The expectations of the Yemeni people is what we really need to be thinking about. And what they’re signalling to everyone right now is that they want to see their leaders, the various Yemeni parties, find a way to end this conflict.

“What we, the US, want to see is a government that treats all Yemenis the same. That doesn’t distinguish between Yemenis based on religion, family, tribe or where you come from regionally. That’s a message we hope the Houthis have heard and one that they understand”.

The talks in Sweden have come at a critical time with a staggering eight million people – a number greater than the entire population of Switzerland – on the verge of famine.

Yemen’s currency, the riyal, has depreciated by nearly 180 percent in recent months, pushing even more towards starvation.

Food prices have increased by an average of 68 percent and the price of fuels such as petrol, diesel, and cooking gas has increased substantially. 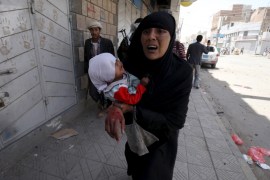 War monitor says it documented more than 3,000 deaths as the Saudi-UAE coalition intensified raids ahead of peace talks. 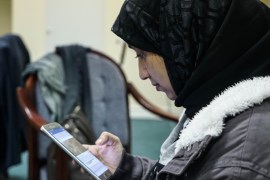 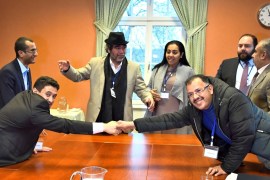