London, United Kingdom – British Prime Minister Theresa May has survived a secret vote of confidence on her leadership of the ruling Conservative Party triggered by rebel MPs disgruntled by her Brexit deal.

Of the Conservatives’ 317 members of parliament, 200 voted in support of May during the poll on Wednesday evening, while 117 went against her.

The vote took place after Conservative Party MPs reached the threshold of 48 demands needed to trigger a confidence ballot on May’s leadership.

Having survived the poll, which came two days after she pulled a parliamentary vote on her proposed divorce plan, May is now immune from another internal leadership challenge for 12 months.

“Whilst I’m grateful for that support, a significant number of colleagues did cast votes against me. And I’ve listened to what they said,” May, who reportedly told her party on Wednesday she would not seek to lead it into Britain’s next general election in 2022, said in a televised statement after the ballot.

May added that her government had a “renewed mission to deliver the Brexit people voted for,” one that “brings back control of our money, borders and laws”, during the United Kingdom’s 2016 referendum on the country’s decades-long membership of the European Union.

“That must start here in Westminster, with politicians on all sides coming together and acting in the national interest,” she said.

But dissatisfied Conservatives and opposition politicians said the result of the vote would not alleviate the chaos gripping May’s government as it seeks to navigate the UK’s departure from the 28-member EU.

Jacob Rees-Mogg, a hardline pro-Brexit Conservative MP and one of the at least 48 who demanded a say on May’s leadership, described the outcome as “terrible” for the prime minister and called on her to resign.

V poor result for PM – setting aside the Payroll, she has secured well under half of the Backbench vote. She must now listen to those of us concerned that she is failing to deliver our clear Manifesto pledges to leave Single Market, Customs Union and remit of ECJ.

Meanwhile, Jeremy Corbyn, leader of the main opposition Labour Party, which has previously threatened to table a no-confidence motion against May, said Wednesday’s vote “changes nothing”.

“Theresa May has lost her majority in parliament, her government is in chaos and she’s unable to deliver a Brexit deal that works for the country and puts jobs and the economy first. She must now bring her botched deal back to parliament next week,” he wrote on Twitter.

The UK is poised to leave the EU on March 29 next year, two years after it triggered Article 50 and kick-started arduous negotiations with European leaders over a divorce deal.

But May is under intense pressure from across the political spectrum over the withdrawal agreement she has brokered with European counterparts.

At the heart of the unrest is her divorce plan’s contentious “backstop” clause – a safety net provision designed to guarantee no hard border is erected between Northern Ireland – a British territory – and the Republic of Ireland – an EU member –  in the event that post-Brexit trade negotiations between the UK and the bloc prove unsuccessful.

But critics of the plan, including from within the Conservative Party, argue it could tie the UK into the EU’s orbit indefinitely.

The Northern Irish Democratic Unionist Party (DUP), which May relies on to command a majority in parliament, have also cautioned it could lead to Northern Ireland being treated differently to the rest of the UK.

‘Parliamentary arithmetic is the same’

Earlier this week, the British leader pulled a parliamentary vote on her proposed divorce plan, acknowledging it would have been roundly rejected by the UK’s lower chamber House of Commons. She has promised to reschedule the vote for before January 21.

Analysts said May’s political survival on Wednesday wouldn’t resolve the “fundamental problem” she faces in attempting to get her withdrawal proposal signed off by MPs.

“This vote won’t change anything with regards to how it will be difficult for her to get her version of Brexit through parliament and if she can’t do that she won’t be able to stay on as prime minister or leader anyway,” Oliver Patel, institute manager and research associate at University College London’s European Institute, said.

“The parliamentary arithmetic is the same: the only thing we know for certain is that most MPs don’t want a no-deal Brexit,” he added.

May will now head to a preplanned EU Council summit in Brussels on Thursday to seek “legal and political reassurances” on the backstop clause in a bid to “assuage the concerns that members of parliament have on that issue”.

But European leaders have so far refused to countenance changes to any aspects of the withdrawal agreement, including the backstop proposal.

On Thursday, the European Parliament’s governing body issued a statement saying the Brexit deal was “not open to renegotiation”.

“The Withdrawal Agreement and Political Declaration are fair and balanced and represent, given EU principles, current UK red lines and the commitments set out in the Good Friday Agreement, the only deal possible to ensure an orderly withdrawal from the European Union,” the statement said.

Analysts, meanwhile, cautioned that May’s government ought to be careful what it “wishes for” in pushing for revised terms.

“Some EU capitals are not perfectly happy with some aspects of this deal, including the final shape of the backstop,” said Agata Gostynska-Jakubowska, a senior research fellow at the Centre for European Reform.

“Any reopening of negotiations could result in opening Pandora’s Box and EU states saying we don’t like this and that [in the deal].”

“The EU are already close to losing their patience and the clock is still ticking [towards Brexit] … the UK is not a predictable partner any longer.“

Ongoing uncertainty over Britain’s Brexit process has raised fears the country could crash out of the EU without a deal on the terms of its departure and played havoc with the country’s currency valuation against the US dollar and the euro.

The UK’s central bank has warned that Britain’s gross domestic product could shrink by up to eight percent in such a scenario. The government, for its part, has forecast a potential economic slump of more than nine percent in the wake of a no-deal Brexit. 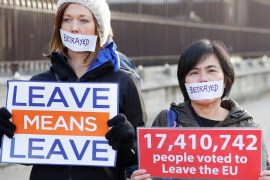 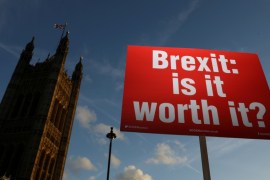