The fiancee of slain Saudi journalist Jamal Khashoggi has called for the perpetrators of the murder to be identified and put on trial.

In an exclusive interview with Al Jazeera that aired on Monday, Hatice Cengiz said she will keep fighting to ensure everyone responsible for his murder is brought to justice.

“I want to expose the details of this horrific crime, identify the perpetrators and put those who carried out the killing on a fair trial, including those who ordered the hit so they get the punishment they deserve,” she said.

“On behalf of Jamal’s relatives and loved ones, and I say this as one of them, we need to know the whereabouts of his body. This is a basic human right.”

Cengiz waited outside the Saudi consulate in the Turkish city of Istanbul as Khashoggi entered the building on October 2. His objective was to obtain documents needed for their upcoming marriage – but instead walked into a death trap.

After waiting for three hours, Cengiz asked the consulate’s staff for his whereabouts. They told her Khashoggi had already left the building via the backdoor.

“I was convinced he was still alive,” Cengiz told Al Jazeera. “I never imagined such a crime could happen in a consulate, and a simple normal person can never imagine what happened in there,” she added.

“Jamal never committed any crimes and never did wrong in any way, and all he did was enter a consulate to get hold of legal papers to get married.”

A critic of the Saudi government and of the powerful Crown Prince Mohammed bin Salman, Khashoggi had resisted pressure from Riyadh for him to return home.

After weeks of repeated denials that it had any involvement with his disappearance, Riyadh eventually acknowledged that Saudi agents had planned and executed the killing. Khashoggi’s body was dismembered and its whereabouts remain unknown.

Saudi authorities are seeking the death penalty for five suspects charged in the case, and have ruled out extraditing Saudi officials, including a top aide to Prince Mohammed, against whom Turkey has issued arrest warrants in connection with the killing.

The kingdom has maintained that MBS had no prior knowledge of the murder.

However, after a closed-door briefing by CIA Director Gina Haspel earlier this week, top senators in the United States have said there was “zero chance” MBS was not involved in the journalist’s killing.

Khashoggi’s murder prompted an international outcry and forced many countries to reassess their ties with the kingdom.

Cengiz, who rejected an invitation from US President Donald Trump to visit the White House in October, said is still living “a shock she cannot overcome” despite the confirmation of the murder.

“We were on the right track, him and I,” Cengiz said.

“He wanted to build a new life. He was exiled and he was in so much pain over it,” she added.

“To be honest, I never imagined the day I’d be in this position – it still hasn’t sunk in,” she said.

“The words fail me.” 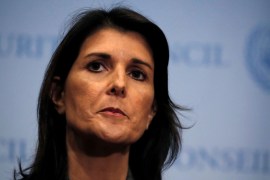 Departing US Ambassador to the UN Nikki Haley says the US should ask for accountability in the Khashoggi case. 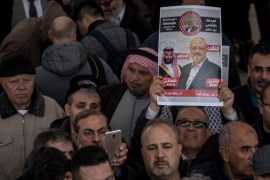 HRW: Turkey should internationalise Khashoggi case to the UN

Rights group urges formal request to the UN to push for an international probe into Saudi journalist’s grisly murder.