Mexico City – Andres Manuel Lopez Obrador has been sworn in as Mexico’s next president, starting his six-year term with a promise to end the corruption, poverty and extreme violence that have plagued the country for more than a decade.

“I swear to defend the constitution of the United Mexican States and its laws, and faithfully and patriotically carry out the post of president of the republic that the people have entrusted to me,” Lopez Obrador said with his right hand raised before the Congress on Saturday.

The 65-year old Obrador, also known as AMLO, won the presidential race in July with over 50 percent of the vote, an historic landslide victory that has not been seen since the end of “one-party rule” almost 20 years ago. He now holds the majority in Congress.

As he takes office, Obrador enjoys at least 56 percent approval ratings, a stark contrast with his predecessor, Enrique Pena Nieto, who is leaving office with only 28 percent approval.

Pena Nieto’s administration was plagued with corruption scandals and crime-related murder rates reached record-high levels. It was the climax of a 12-year “war on drugs” that has claimed over 200,000 lives and left over 37,000 people missing.

The new leftist president, who was Mexico City’s mayor before running thrice for the presidency, promised during his campaign to put an end to the violence and send soldiers back home

“I understand you can’t fight violence with more violence; to put out fire with fire,” he said during the campaign.

Since becoming president-elect, Obrador has been actively setting the stage for his presidency and has already amended some of his campaign promises.

Instead of taking the troops off the streets and back to the barracks – even a few days after the Supreme Court had ruled the army handling public security unconstitutional – last week his party introduced a bill to amend the constitution in order to keep the military on the front lines by creating a National Guard.

According to the bill, the Federal Police would be dismantled and some of these officers will be reassigned along with military and navy police to form the new National Guard, under a single military command.

The military has repeatedly been accused of human rights violations, including extrajudicial killings, during the 12-year crackdown on organised crime that was supposed to be a temporary measure to restore rule of law across the country.

The new bill also promises the National Guard’s role would be temporary, “only as long as the violence and insecurity crises prevail in the country,” it reads.

It will also be subject to presidential and Congressional review every three years.

“You don’t change 13 articles of the Constitution for something temporary.”

According to Hope, it will be difficult to hold the National Guard accountable for human rights violations because it will be overseen by the defence secretary, and there is also a conflict of interest in having the president create the body and review its performance at the same time.

“This goes in opposite direction [of democracy],” Hope said. “Democratic reforms in the security sector seek removing the military from public safety responsibilities, to restrict their action limits, and to strengthen civil control over the army.”

In addition to security, one of the first challenges the new president will be facing as he takes office is addressing the Central American migrant crisis at the border with the United States.

In Tijuana, just across from San Diego, over 6,000 migrants, mainly from Honduras, who have been travelling by foot on a caravan since October, wait to be granted asylum into the US.

The situation has strained the relationship between both countries, particularly after President Donald Trump took a strong stance against granting asylum to Central American migrants and blamed the Mexican government for not doing enough to stop them weeks before the midterms.

“There’s a humanitarian crisis waiting to explode any moment now, and that will demand positioning, actions and discourse from Obrador.”

Addressing the crisis will probably put Obrador at odds with both Trump and his own voters since the US expects Mexico to shelter and grant asylum to the migrants while there’s a growing anti-immigrant sentiment among some Mexicans.

Obrador’s approval ratings had taken a hit even before he took office, dropping from 64 percent when he was elected to 56 percent last week, according to polls from national newspapers.

Some of the reasons attributed to the drop were two referendums he made before taking office for deciding on key issues such as scrapping a multimillion-dollar ongoing airport construction project and green-lighting 10 others, some of which already had investors and allocated lands even before he made the consultations.

The referendums have drawn widespread criticism because local media attested to their own reporters voting up to six times, and voter turnout was extremely low (less than one million in a country of 129 million).

“The referendums are being used as a tool for legitimizing decisions that have already been made,” said Bravo.

“They’re not participatory democratic exercises, but rather simulations.”

Trade was another key issue for Mexico’s new administration to address but, just a day before Obrador took office, Pena Nieto signed the USMCA deal that will be replacing NAFTA with the US and Canada, with no public objections from the new president.

“This government has already made history,” Bravo said.

“He is the first president to win by an absolute majority and has control over Congress, and that makes change feasible. He will be the most powerful president.

“The key issue is whether he will be able to transform this into visible results. Because even as so many people trust and believe in him, if there’s’ no visible results within three years all that hope will become anger and rage. He carries an enormous responsibility.” 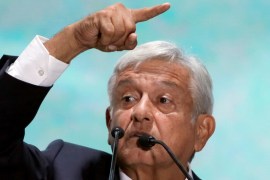 The newly elected Mexican president will have to prove that his promises to confront Trump are more than just rhetoric. 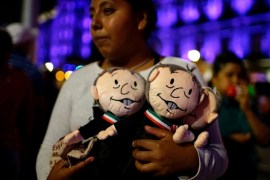 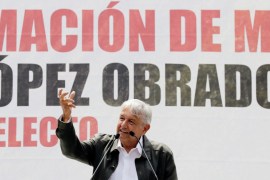 Mexico’s incoming ‘leftist’ president wants to be both a man of the people and a friend to big business. 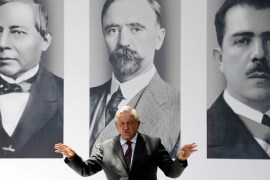 Armed forces will continue being used in effort to stamp out organised crime and drug trafficking, says president-elect.