Sessions informed Trump of his resignation in a letter sent to the president earlier in the day. In the letter, which was widely shared by US media, Sessions said he was resigning “at your (Trump’s) request”.

On Twitter, Trump thanked Sessions for his service and wished him well. He said Matthew G Whitaker, Sessions’s chief of staff, would become the acting attorney general until a replacement is announced, which the president said would come at a later date.

In the resignation letter, Sessions said he was honoured to have worked “to implement the law enforcement agenda” that formed a central part of the Trump campaign for presidency.

“We did our part to restore immigration enforcement,” he wrote.

The former senator was a key figure in implementing Trump’s anti-immigration agenda.

He threatened sanctuary cities, which are cities and states that limit cooperation with federal immigration authorities, with a withdrawal of federal funds and instituted a “zero tolerance” policy for those found crossing the border into the US without documents.

What’s next for the Mueller probe?

Trump’s criticism of Sessions stemmed over Sessions decision to recuse himself from an investigation into Russian meddling in the 2016 US presidential election.

The US president did not hesitate to make those criticisms public.

“If all of the Russian meddling took place during the Obama Administration, right up to January 20th, why aren’t they the subject of the investigation? Why didn’t Obama do something about the meddling? Why aren’t Dem crimes under investigation? Ask Jeff Sessions!” He wrote on Twitter in February.

Trump blamed the decision for opening the door to the appointment of special counsel Robert Mueller, who took over the Russia investigation and began examining whether Trump’s hectoring or Sessions was part of a broader effort to obstruct justice and stymie the probe.

Mueller is overseen by Deputy Attorney General Rod Rosenstein, who reports to Sessions.

There were reports Trump may fire Rosenstein, a frequent critic of the president, earlier this year, but last month Trump said he had no plans to get rid of the deputy attorney general.

US media reported on Wednesday that Whitaker, who has criticised Mueller in the past, would likely oversee the Russia probe.

Trump was buoyed on Wednesday by victories that added to the Republican majority in the US Senate, telling reporters at the White House that the gains outweighed the Democrats’ takeover of the House. He added that he was willing to work with Democrats on key priorities but felt any House investigations of his administration would hurt prospects for bipartisanship.

Jerry Nadler is in line to become the chairman of the Judiciary panel when Democrats take control of the House in January. He tweeted that “we will be holding people accountable”.

He added that it would be “wholly inappropriate” if Whitaker takes on the role of supervising the probe.

Senate Minority Leader Chuck Shumer said it is “paramount” that the Mueller investigation be protected by Trump’s new attorney general.

He called the timing of Sessions’s departure “very suspect”, adding that it would spark a “constitutional crisis” if Trump forced out Sessions as a “prelude” to ending or limiting Mueller’s investigation.

Democratic House leader, Nancy Pelosi, called the firing of Sessions “another blatant attempt” by Donald Trump to end the Mueller investigation, and criticised his choice of acting replacement.

“Given his record of threats to undermine (and) weaken the Russia investigation, Matthew Whitaker should recuse himself from any involvement in Mueller’s investigation. Congress must take immediate action to protect the rule of law and integrity of the investigation. #FollowTheFacts,” she wrote on Twitter.

Given his record of threats to undermine & weaken the Russia investigation, Matthew Whitaker should recuse himself from any involvement in Mueller’s investigation. Congress must take immediate action to protect the rule of law and integrity of the investigation. #FollowTheFacts 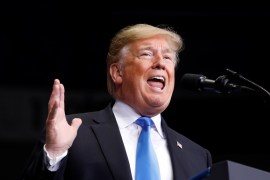 Threats, bipartisanship, and a CNN spat: Trump reacts to midterms

US president threatens Democrats while pledging to work with them on a number of issues in erratic press conference. 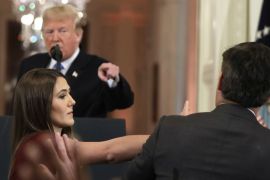 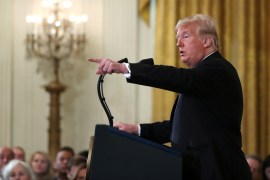