Parts of the Pacific Northwest in the United States can expect some snow but the worst of the weather can have an impact on the midterm polls in several key states further east on Tuesday.

An active area of low pressure is moving through the Midwest into the Great Lakes. The cold front associated with it extends right into the Deep South.

As this weather system makes its way towards the Atlantic, severe storms are expected across the eastern third of the country.

The deepening area of low pressure threatens to bring heavy rain with thunder to many parts of the Mississippi, Tennessee and Ohio Valleys, bringing hail and damaging and there is even the possibility of tornadoes.

Wet weather is likely for much of election day with downpours expected right along the eastern seaboard.

Some of the worst conditions could break out around the mid-Atlantic states, anywhere from southern Pennsylvania to North Carolina. Storm clouds may well be brewing up over Washington, DC, by the end of the day.

Further west, the weather does look a good deal more agreeable with plenty of crisp sunshine for many, and just a dusting of snow in the Pacific Northwest. 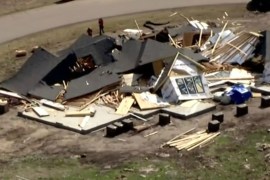 Tornadoes flatten homes in US Midwest

A second day of severe weather batters the US with damaging hail and torrential rain hitting Oklahoma and Louisiana. 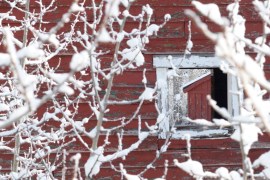 Thanksgiving storms batter the US

Bad weather sweeps across the Great Plains, putting a dampener on the long holiday weekend.