The Democratic Republic of Congo’s deadly Ebola outbreak is now the second largest in history, behind the devastating West Africa outbreak that killed thousands a few years ago, according to the World Health Organization (WHO).

That includes 379 confirmed cases and 47 probable ones.

The latest outbreak is the tenth in DR Congo since Ebola was first detected there in 1976.

The crisis is centred around the restive eastern city of Beni in North Kivu, a region which has been blighted by armed conflict, which has hampered efforts to curb the outbreak.

Attacks by rebel groups and open hostility by some wary locals have posed serious challenges to health workers that Ebola experts say they have never seen before.

Many venture out on critical virus containment missions only accompanied by UN peacekeepers in areas where gunfire echoes daily.

Peter Jay Hotez, from Baylor College of Medicine, told Al Jazeera the violence has contributed to the collapse of the healthcare infrastructure, so efforts by health workers are seriously hampered.

“The good is we have a vaccine now. But the problem is, working in such an unstable area, you have to assure to safety of the vaccinators, and you have to be able to trace potential contacts, and get them vaccinated.”

Salama of WHO predicted that the outbreak in the northeastern part of the country will last at least another six months before it can be contained.

More than 37,000 people have received Ebola vaccinations, and DR Congo has begun the first-ever trial to test the effectiveness and safety of four experimental Ebola drugs.

Yet, the risk of Ebola spreading in so-called “red zones” – areas that are virtually inaccessible because of the threat of rebel groups – is a major concern in containing this outbreak.

“This tragic milestone clearly demonstrates the complexity and severity of the outbreak. While the numbers are far from those from West Africa in 2014, we’re witnessing how the dynamics of conflict pose a different kind of threat,” said Michelle Gayer, senior director of emergency health at the International Rescue Committee.

In a major concern for health workers, many new cases have been unconnected to known infections as the insecurity complicates efforts to track contacts of those with the disease.

The alarmingly high number of infected newborns in this outbreak is another concern, and so far a mystery.

In a separate statement on Thursday, WHO said so far 36 Ebola cases have been reported among newborn babies and children under 2.

As the need for help in containing the outbreak grows, two of the world’s most prominent medical journals this week published statements by global health experts urging the Trump administration to do more.

In the Journal of the American Medical Association, one group noted that the US government weeks ago ordered all Centers for Disease Control and Prevention personnel – “some of the world’s most experienced outbreak experts” – from DR Congo’s outbreak zone because of security concerns.

A separate statement published in the New England Journal of Medicine said: “Given the worsening of the outbreak, we believe it’s essential that these security concerns be addressed and that CDC staff return to the field.”

Ebola is a serious infectious disease that can spread rapidly through small amounts of bodily fluid, causing internal bleeding and potentially death.

DR Congo is in the throes of a major campaign ahead of a December 23 election to choose a successor to President Joseph Kabila, who has ruled the vast central African country since 2001.

Since winning independence from Belgium in 1960, this poverty-stricken nation has never known a peaceful transition of power. 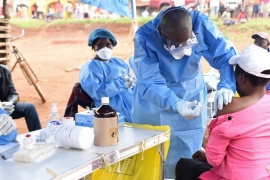 Why Ebola crisis in DRC is unlike anything before

Democratic Republic of Congo has seen multiple outbreaks of Ebola, but this time it faces more challenges. 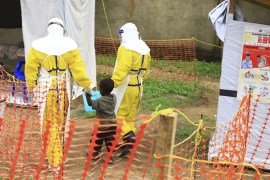 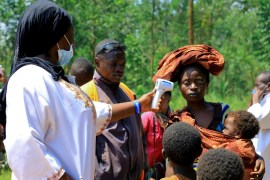 The rate of new Ebola cases has more than doubled after rebels forced response efforts to be briefly suspended.