Tens of thousands of farmers and agricultural workers marched towards the Indian parliament on Friday demanding debt waivers and higher crop prices, putting pressure on Prime Minister Narendra Modi ahead of 2019 general elections.

“We are demanding legal rights for farmers – especially for tenant farmers and women farmers with no rights,” said Kavitha Kuruganti, who represents the advocacy group, Alliance for Sustainable and Holistic Agriculture.

“Our farmers need secure rights over land and better prices for their crop to be free from debt,” she told the Reuters news agency.

Organisers said some 80,000 farmers and farm labourers were participating in the two-day agitation, termed as “Dilli Chalo” (March to Delhi), that will culminate with a petition to the Indian president.

“We have three main demands. Debt waiver, maximum price for the produce and a special parliament session to discuss the crisis,” Ajit Nawale from Maharashtra Kisan Sabha, one of the 200 farmer groups organising the Delhi March, told the AFP news agency.

“Farmers not seeking any gift from the government on farm loan waiver. They are asking for what’s due to them,” Gandhi was quoted by Indian media as saying.

Farmers are demanding a spl.session of parliament to interrogate the model of #agriculture we are headed twds.

More than 300,000 farmers have killed themselves in the last 20 years, mainly because of poor irrigation, failed crops and being unable to pay back loans.

Each year, millions of small farmers suffer due to scant irrigation facilities that reduces the yield and leads farmers into a deadly cycle of debt and suicides.

Farmers from across the country, who travelled by trains and buses, flooded New Delhi since Thursday as they gathered at the capital city’s Ramlila Grounds before marching to parliament.

Participants marched through central Delhi, chanting slogans and holding placards that said “Down With Modi Government” and “Long Live Farmer Unity” as thousands of riot and armed policemen stood guard.

“The farmer crisis has got twice as bad in the last five years,” Sadhu Singh, a farmer from northern Punjab state, known as the wheat bowl of India, told AFP.

“We are losing money on every grain of rice we produce,” he said.

Friday’s demonstration was the latest of several such protests this year.

On Wednesday, some 50,000 people marched in the eastern city of Kolkata in solidarity with farmers.

In March, thousands of women farmers marched into Mumbai alongside their male peers in March, demanding recognition of their rights over forest and farmland.

Campaigners said implementation of the landmark 2006 Forest Rights Act (FRA), which was meant to benefit a fifth of India’s population, has been hobbled by conflicting legislation and a lack of political will.

At the same time, states have diluted several protective clauses of the Land Acquisition Act of 2013 to speed up purchases for industry and infrastructure.

Since the laws are not effectively applied, farmers need “stronger rights to their land”, said Namita Wahi, a senior fellow at the Centre for Policy Research, a think-tank in New Delhi.

“(Farmers need) not only a title, but also use, possession, occupancy and livelihood rights,” she told the Thomson Reuters Foundation.

The rights of farmers and indigenous people

The rights of farmers and indigenous people have grabbed an unlikely spotlight in assembly elections in Rajasthan, Madhya Pradesh and Chhattisgarh states.

The government points to initiatives such as improved irrigation, crop insurance and electronic trading platforms as evidence it has helped rural Indians, who make up about 70 percent of the 1.3 billion population.

The right-wing prime minister has promised to double their income by 2022 but farmers say nothing has changed for them.

Labo Banigo from eastern Odisha state said he is under huge debts after his crops failed due to back-to-back bad monsoons.

We have three main demands - debt waiver, maximum price for the produce and a special parliament session to discuss the crisis

“My farm is a wasteland. There is hardly 10 percent produce,” Banigo told AFP. “Modi promised to double our income but we can’t even feed ourselves.”

Economist Niranjan Rajadhyaksha called for the right to property to be reinstated in the constitution.

India’s constitution of 1950 recognised the right to property as a fundamental right. But subsequent laws undermined that right and it was scrapped in 1978.

No major political party has since made reinstatement of the right to property a campaign issue, lest they be seen as pandering to the rich, Rajadhyaksha wrote in the Mint newspaper.

“Property rights are a tool of inclusion rather than exclusion,” he wrote.

“The poor have neither the legal resources nor the political heft to fight laws or administrative orders that allow the takeover of their land, (and) not enough opportunities to make a living in case they are forcibly separated from their property.” 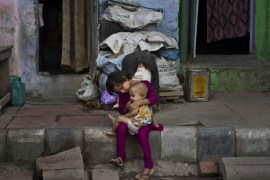 Forty-six million children in India are stunted because of malnutrition and 25 million more defined as ‘wasted’.