New York City – A Jewish professor’s office at a university in New York City has been vandalised with anti-Semitic graffiti, including swastikas and an anti-Semitic slur, underlining recent concerns of a rising number of hate crimes against Jews in the United States.

According to the New York Police Department (NYPD), Elizabeth Midlarsky, a professor in psychology and education at Columbia University’s Teachers College in Manhattan, discovered the swastikas on the wall of her office on Wednesday afternoon.

“There were two swastikas and the word ‘YID’ on the wall,” Detective Hubert Reyes of the NYPD told Al Jazeera.

“YID”, from “Yiddish”, is widely considered a slur against Jews.

The detective said no one had been arrested, adding that the NYPD’s hate crime task force was investigating for “a possible biased crime”.

Midlarsky did not respond to requests from Al Jazeera for comment, but the college newspaper Columbia Daily Spectator, quoted her saying that she was in a state of shock.

“I stopped for a moment because I couldn’t believe what I was seeing,” Midlarsky said.

Columbia University’s Teachers College did not respond to questions sent by Al Jazeera but, in a letter to its community, Thomas Bailey, president of the college, said: “We are outraged and horrified by this act of aggression.”

“We unequivocally condemn any expression of hatred, which has no place in our society. We are outraged and horrified by this act of aggression and use of this vile anti-Semitic symbol against a valued member of our community,” Bailey wrote.

According to multiple reports, this is the second time Midlarsky’s office has been defaced with anti-Semitic slurs. The first time it happened was in 2007.

In speaking to the Columbia Spectator, she attributed Wednesday’s vandalism to the broader rise of anti-Semitism across the country.

The US has seen an uptick in hate crimes, particularly against African Americans, the LGBTQ community and the Jewish and Muslim communities, since President Donald Trump took office in 2016.

In early November, the NYPD said there had been a 22 percent increase in anti-Jewish hate crimes in 2018.

Writing in the Washington Post following the massacre of 11 people at Pittsburgh’s Tree of Life synagogue in October, Rabbi Danny Schiff, foundation scholar at the Jewish Federation of Greater Pittsburgh, said even though anti-Semitism is at a low ebb in the contemporary US compared with any other moment in Jewish history, “anxiety over an anti-Semitic resurgence is never far from the surface, and the inexorable drumbeat of anti-Semitism can hardly be said to have been silenced”.

Robert Bowers, who posted a number of anti-Semitic remarks on the social media site Gab, has been charged with a slew of crimes, including federal hate crimes, for the attack.

Earlier this month, the Federal Bureau of Investigations (FBI) said the number of reported hate crimes had increased in 2017 by 17 percent, the largest increase in more than 10 years.

It said it documented 7,175 hate crimes across the country through the course of the year. At least 20 percent of all incidents were linked to anti-religious bias.

It also said that the number of anti-Semitic incidents had increased by 37 percent between 2016 and 2017.

The FBI report corroborated earlier findings published in May by the Center for the Study of Hate & Extremism at California State University, San Bernardino, which found that the number of hate crimes reported to the police in the country’s largest cities had increased by 12.5 percent in 2017.

The report concluded that in New York City, home to 1.1 million Jews and considered the largest concentration of Jews outside Israel, the community “have consistently been the top target and the overwhelming majority of anti-Semitic attacks in the 10 largest cities”.

‘Trump sends a message these acts are acceptable’

Ginna Green, chief strategy officer of Bend the Arc, a Jewish social movement based in New York City, told Al Jazeera that the latest act of vandalism was a reminder that communities “remain under threat by white nationalism in our government and our neighbourhoods”.

Green said Trump’s embrace of white nationalist ideology and rhetoric has created the conditions for anti-Semitic harassment and violence.

“By not only failing to condemn white nationalism, but actively encouraging it and adopting it as his worldview, Trump sends a message to his supporters that these horrific acts are acceptable.”

For the recent wave of violent attacks to stop, it will require a president who stops using conspiracy theories - against anyone - Muslims, Mexicans, foreigners - as a foil to win elections.

Jeffrey Herf, professor at the Department of History at University of Maryland, told Al Jazeera that the movement of anti-semitism “from the margin to the mainstream is the great problem, as Trump’s conspiracy theories have made evident”.

“The otherness of Jews in the United States has to do with lingering cliches inherited from Christianity, cliches and stereotypes that are reproduced in lies and distortions about Israel and its policies,” he said.

“For the recent wave of violent attacks to stop, it will require a president who stops using conspiracy theories – against anyone – Muslims, Mexicans, foreigners – as a foil to win elections.” 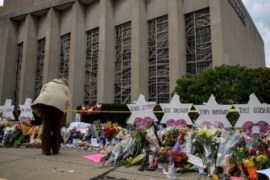 Fighting growing anti-Semitism in the US 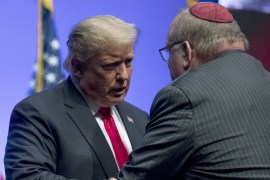 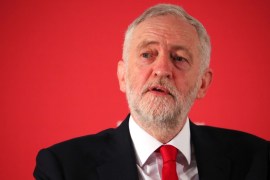