Five international aid groups on Monday urged the United States government to halt all military support for a Saudi Arabia-UAE-led war in Yemen, saying this will save millions of lives.

A joint statement by the International Rescue Committee, Oxfam America, CARE US, Save the Children, and the Norwegian Refugee Council said that 14 million people are at risk of starving to death in Yemen if the parties to the conflict do not change course immediately.

The warring sides have undermined Yemen’s economy with policies and practices that have caused rampant inflation while the value of currency plummets, it added.

“Starvation must not be used as a weapon of war against Yemeni civilians,” the statement said.

“All warring parties, and those fuelling the conflict through arms transfers, are implicated in this totally man-made humanitarian crisis.”

The charities called the US to back up its recent call for a cessation of hostilities in Yemen with genuine diplomatic pressure, mainly on Saudi Arabia and the UAE.

International outrage over the killing of journalist Jamal Khashoggi by Saudi agents in October in Turkey has also focused attention on Yemen’s civil war, prompting the US to scale back its support for the coalition and call for a ceasefire by the end of this month.

Concerned by the rise of the Houthis, a Saudi-UAE military coalition, backed by the US, intervened in 2015 with a massive air campaign aimed at reinstalling the government of Abd-Rabbu Mansour Hadi.

Since then, data collected by Al Jazeera and the Yemen Data Project has found that more than 18,000 air raids have been carried out in Yemen, with almost one-third of all bombing missions striking non-military sites.

Weddings, funerals, schools and hospitals, as well as water and electricity plants, have been hit, killing and wounding thousands.

Tens of thousands of people have been killed in the war, and according to Save the Children, as many as 85,000 children under five “may have died from extreme hunger” or disease since 2015.

If it does not end its military support for the coalition, “the United States, too, will bear responsibility for what may be the largest famine in decades,” the charities said. 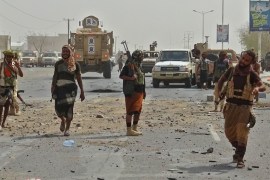 Yemen’s Houthi rebels say they have suspended drone and missile attacks against the Saudi-led coalition. 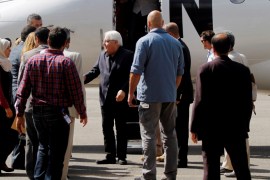 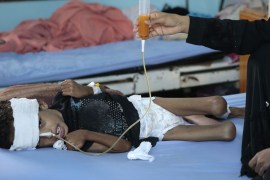 Yemen: 85,000 children may have died from starvation

Aid group Save the Children analysed UN data and found tens of thousands of kids under 5 perished from severe hunger.