Russian President Vladimir Putin has said that Ukraine is to blame for the confrontation in Crimea, as Moscow warned that the conflict could escalate because of Kiev’s decision to declare martial law.

In a phone call with German Chancellor Angela Merkel on Tuesday, Putin said he is “seriously concerned” about the weekend naval standoff off the coast of Crimea between the Ukrainian navy and Russia’s coastguard, which saw the latter seizing three Ukrainian ships and their crew.

The Russian president accused Ukraine of provoking the confrontation for political reasons.

Merkel’s spokesperson, Steffen Seibert, said the chancellor in the conversation with Putin stressed the need for de-escalation and dialogue.

Hours after the phone call between Moscow and Berlin, the Kremlin also issued a follow-up statement denouncing the martial law in Ukraine.

“The imposition of martial law in some regions may pose a risk of escalating tensions in the conflict-hit region, namely the south-east,” Kremlin spokesperson Dmitry Peskov said in comments carried by the state news agency, TASS.

Ukraine’s leadership responded to the weekend clash by imposing martial law throughout much of the country on Monday, just as the UN held an emergency session to discuss the escalating tensions.

Meanwhile, a Crimean court on Tuesday ordered five of 24 captured Ukrainian sailors to be held in jail for two months for their involvement in the incident.

On Wednesday, 12 more will appear in court after Russia accused them of illegally entering its territorial waters.

Several others are still in the hospital for treatment.

Djamil Temishev, a lawyer for sailor Roman Mokryak, said the sailors’ cases will be handed over to Moscow after the Crimean court determines their fate.

The 24 sailors were caught on Sunday after Russia seized two Ukrainian navy ships and one tugboat near the Kerch Strait.

Ukraine Navy Commander Vice Admiral Ihor Voronchenko wrote an official letter to the Ukrainian sailors, which was passed on to them through their lawyer, showing them support.

“It is normal to be afraid. The main thing is to believe in your will, defend your dignity and to remember that entire Ukraine is with you, entire civilized world,” Voronchenko said.

“All sailors understand what is behind your ‘testimonies’, we all know how RU (Russian) special forces work. I went through this in 2014 and I know what does it mean to be captured and what every word you say during the interrogation means,” he added.

“I’m proud of each and every one of you. Thank you for your loyalty to the Motherland and remember that we do whatever is in our power to get you back to your families that are waiting for you.”

Russia also released a video statement by three Ukrainian sailors, Andriy Drach, Serhiy Tsybizov and Volodymyr Lisoviy, in which they state the ships were planning to enter the Strait and ignore Russian orders to stop the ships.

The Ukrainian government said the statements should not be taken seriously, claiming the sailors made their statements under duress and threat of torture, the Kyiv Post reported.

On Tuesday, the country’s state security service announced that its intelligence officers were among the crew on Ukrainian naval ships seized by Russia.

The SBU agency said the officers were fulfilling counterintelligence operations for the Ukrainian navy, in response to “psychological and physical pressure” by Russian spy services.

It did not elaborate, but demanded that Russia stop such activity.

“This hasn’t been heard of before,” Simmons said, adding that there were injuries during the incident.

Pro-Russian separatist groups, which Russia has represented in negotiations, and the Ukrainian military have been battling in Ukraine’s two eastern-most regions for the past four years.

With tensions spilling over, German Foreign Minister Heiko Maas suggested on Tuesday that Germany, France, Russia and Ukraine could work together to resolve the tensions between Moscow and Kiev.

“We must do everything for de-escalation, to prevent this crisis turning into an even more serious crisis for security in Europe,” Maas said.

He called on the two parties to show the greatest possible restraint, and offered to work on a solution to end the crisis. 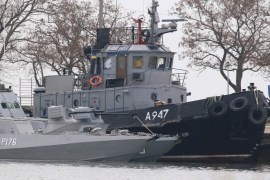 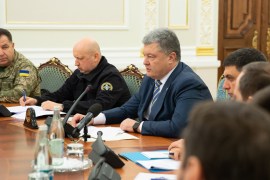