Tunis, Tunisia – For a second day in a row, Tunisians have taken to the streets of the country’s capital to express their anger at a visit by Saudi Crown Prince Mohammed bin Salman.

Hundreds of people on Tuesday gathered in the iconic Habib Bourguiba Avenue in central Tunis to protest against the crown prince’s arrival after the allegations of his involvement in the murder of Saudi journalist Jamal Khashoggi in the kingdom’s consulate in Istanbul on October 2.

The avenue was the scene of massive demonstrations more than seven years ago which toppled long-time ruler Zine El-Abidine Ben Ali and sparked a wave of uprisings across the Middle East. Ben Ali, who held power for 23 years, has been a fugitive in Saudi Arabia since 2011.

“I was here yesterday and I came here again to say ‘No’ to the murderer and criminal, Mohammed bin Salman,” Said Arous, a prominent human rights activist, told Al Jazeera, calling Khashoggi’s killing “an appalling crime”.

The crown prince – also known by his initials, MBS – arrived in Tunisia on Tuesday evening as part of a regional tour as he makes his way to the G20 summit set to take place in Argentina on Friday. In Tunis, he is expected to hold talks with the country’s president and prime minister.

'We cannot accept to receive or welcome a dubious crown prince."

Tunisians have been protesting a planned visit by Saudi's MBS. It is his first overseas tour since the murder of Jamal Khashoggi. pic.twitter.com/xKyXn0rJiG

Arous said the crown prince’s tour – his first time abroad since Khashoggi’s killing – is aimed at whitewashing his image abroad amid an international outcry over the murder of the Washington Post columnist.

“We are not here to support the Qatari-Turkey axis over the UAE-Saudi Arabia axis,” Arous said, in reference to an ongoing diplomatic spat that began last year when a Riyadh-led quartet imposed a blockade on Qatar.

A recipient of Gulf aid and investment, Tunisia has officially avoided taking a side in the dispute.

“We are here to underline our dignity, our national sovereignty and to say we are not for sale,” said Arous.

“We don’t need your oil barrels, or your petrodollars. The free Tunisian people are not for sale,” Arous added, as if he was addressing MBS.

Protesters also denounced a Saudi-led military campaign in Yemen, where a four-year war has spawned the world’s worst humanitarian crisis.

“I left my children without lunch today and came down to this street, the street of the revolution, to say ‘No’ to this murderer and to urge Arab leaders to save the innocent children of Yemen,” said Latifa, a stay-at-home mother, preferring to go only by her first name.

Campaigners have long accused MBS of being the “chief architect” of the devastating war in Yemen, which is believed to have killed tens of thousands of people, including many children.

“Tunisia is pure now. If you have blood on your hands, don’t come to Tunisia,” said Latifa.

Prince Mohammed’s next stop is Buenos Aires, where will attend the G20 meeting on November 30-December 1.

In Argentina’s capital, he is expected to meet other world leaders, including US President Donald Trump, who has given the crown prince a pass on Khashoggi’s murder.

Human Rights Watch, a US-based rights group, has formally asked Argentina to use a war crimes clause in its constitution to investigate MBS’ alleged role in possible crimes against humanity in Yemen and the assassination of Khashoggi.

Argentina recognises universal jurisdiction for war crimes and torture, which technically allows its judiciary to investigate and prosecute those crimes regardless of where they were committed.

Cases taking advantage of universal jurisdiction clauses have had success in the past. Still, Argentine media cited judicial sources in recent days as saying it was extremely unlikely for Buenos Aires to take up the case against MBS.

Saudi authorities have repeatedly denied that MBS had any knowledge of the killing and its subsequent cover-up.

Back at the protest site, Arous argued that the crown prince is also using his time abroad to promote the so-called “deal of the century”, a term widely used to refer to Trump’s plan for Israeli-Palestinian peace.

Details of the plan have not yet been announced but media reports have suggested that the US had offered the Palestinian Authority a Jerusalem suburb as an alternative to East Jerusalem for the capital of a future Palestinian state.

In a controversial move last year, Trump recognised Jerusalem as Israel’s capital and later moved the US embassy there.

“He (MBS) wants to convince Arab presidents and kings to make Jerusalem the forever capital of the Zionist entity,” said Arous.

Tunisia does not have diplomatic relations with Israel, and any activity perceived as normalisation with the Israeli state is banned under the law.

In 2016, Mohammed al-Zawari, a Tunisian aviation engineer who the Palestinian group Hamas said was one of its members, was assassinated in his home in Tunisia’s coastal region. His killing was blamed on the Israeli national intelligence agency Mossad.

But Tunisians’ anger towards Israel goes beyond a pro-Palestinian sentiment. In 1985, an Israeli air raid on the headquarters of the Palestine Liberation Organization south of the capital killed more than 30 people, including Tunisian citizens.

Flags from several African countries could be seen in Tuesday’s protest, most visibly those of Egypt and Algeria. Their presence, protesters said, was meant to convey the presence of a widespread sentiment against the Saudi de-facto ruler’s trip across the region, regardless of the Arab governments’ ties with him.

Before arriving in Tunis, MBS had already visited the United Arab Emirates, Bahrain and Egypt. In Cairo, he was greeted warmly on Monday by President Abdel Fattah el-Sisi, in what Egyptian media dubbed as a “protest of love”.

Tarek Hussein, an Egyptian human rights lawyer residing in Tunis, said it meant a lot to him to see his country’s flag raised in Tuesday’s protest.

“The Tunisian people came out today to show other Arab dictatorships that the Arab people could still go out to the streets and express their anger,” he said. 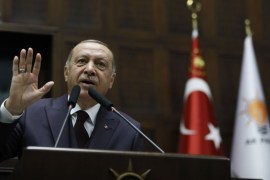 Cavusoglu says Erdogan has no reason not to meet MBS during G20 summit later this week, German newspaper reports. 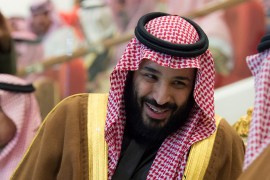