Kiev, Ukraine – The parliament of Ukraine has backed a decree imposing martial law for 30 days following Russia’s seizure of three Ukrainian ships near the Crimean Peninsula.

In an emergency session of the lower-house Verkhovna Rada on Monday, parliamentarians voted in favour of President Petro Poroshenko‘s proposal to roll out the extraordinary measure from Wednesday onwards.

Poroshenko initially proposed rolling out the decree for a 60-day period, but halved the proposed timeframe ahead of Monday’s parliamentary session.

During a televised address prior to the vote, he also declared that the decree would not include any restrictions on citizens’ rights and ruled out any delay to elections scheduled to take place early next year.

Addressing fears of heightened tensions between Kiev and Moscow, the 53-year-old had said earlier that the step did not mean a declaration of war against Russia.

“Ukraine is not planning a war against anyone,” he told the National Security and Defense Council.

Poroshenko also said that Ukraine would stick to the Minsk Agreements, peace deals his government inked with Russia and pro-Russian separatists in southeastern Ukraine that were designed to stop a war that claimed more than 10,000 lives since 2014.

The imposition of martial law permits the Ukrainian government to impose a range of drastic measures, if deemed necessary, including placing a ban public gatherings, restricting media freedoms, limiting the movement of Ukrainian nationals as well as foreign nationals and suspending elections.

Poroshenko, whose approval ratings are below 10 percent, is widely believed to be seeking re-election in the March 31 vote.

His cash-strapped and increasingly unpopular government relies on Western loans to keep the economy afloat.

“We need new sanctions against Russia,” Mykola Tochitsky, Ukraine’s ambassador to the European Union, wrote on Twitter on Monday.

“We must stop Kremlin’s war against Ukraine.”

Poroshenko, for his part, called the attack “an act of aggression”.

Moscow has claimed that Ukraine “provoked” the Russian ships by entering Crimea’s waters, however.

The Ukrainian ships had left a military base in the Black Sea port of Odessa days earlier and circumnavigated Crimea to enter the Sea of Azov, a shallow body of water shared by Russia and Ukraine.

On Monday, Russian Foreign Minister Sergey Lavrov hit back at the accusations from Kiev and accused Ukraine of violating “key norms of international law”.

“We don’t have any doubts that this was done with the knowledge of Ukrainian authorities and was probably a direct order from the highest level of government,” Lavrov told reporters at a press conference in the Russian capital, Moscow.

“I think we haven’t yet seen everything in terms of the consequences of yesterday’s provocation,” he added. 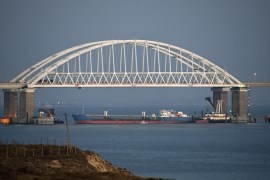 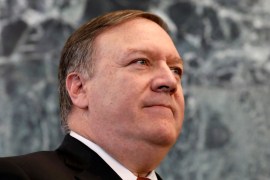 US will ‘never recognise Russia’s annexation of Crimea’

US Secretary of State Mike Pompeo says ” Russia has acted in a manner unworthy of a great nation” by annexing Crimea.