Fifty-four million Americans were expected to take to the roads, rails and skies over the long Thanksgiving weekend.

This period is traditionally the busiest travel week of the year, with many people leaving for the holiday on Tuesday and Wednesday, then returning to their homes on Sunday.

While the start of the travel period was relatively quiet in terms of weather, it was a very different scenario by Saturday.

In the middle of the holiday weekend, a major winter storm began moving in from the Pacific Northwest and into the Rocky Mountains.

On Interstate 70, near the town of Frisco, Colorado, the heavy snow caused a 20 vehicle pile-up on Saturday.

Snow and strong winds also forced the closures of Interstate 80 in southeastern Wyoming from Saturday evening into Sunday.

By Sunday morning, winter storm warnings, watches and blizzard warnings were issued from the Central Plains to the Midwest, affecting about 24 million people, including the busy hubs of Chicago, St Louis and Kansas City.

Blizzard conditions brought highways to a crawl and caused over 1,400 flights to be cancelled with another 5,000 delayed.

As a result of the extremely low visibility encountered during the blizzard, 12 people were injured in a multi-car accident in Piedmont, Kansas.

This early winter storm brought some impressive snow totals to many locations in its path with Brighton, Utah picking up 76 centimetres and Loveland Pass, Colorado picking up 52cm and an estimated amount for Mt Zirkel, Colorado of 95.7cm.

On Monday morning the storm was still threatening millions across the Midwest and Great Lakes region, promising more flight cancellations and delays by the end of the day. 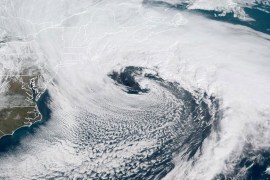 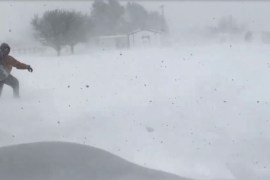 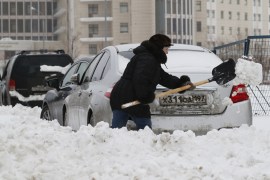