French security forces have fired tear gas and water cannon at “yellow vest” protesters in the capital, Paris, as some demonstrators threw projectiles at the police and built barricades in the city.

The majority of the protests passed off peacefully, but some anti-government demonstrators in Paris clashed with the security forces, drawing the ire of President Macron, who thanked the police in a Tweet on Saturday.

“Shame” on those who assaulted or intimidated citizens, journalists and politicians, the French president said. “There is no place for violence in the (French) Republic.”

Thousands of police were deployed nationwide to contain Saturday’s rallies, which saw 106,000 protesters across France, according to officials, including 8,000 people in Paris.

The protesters are upset about new taxes on diesel and petrol, justified as an anti-pollution levy by Macron’s centrist government.

A week ago, more than 250,000 people wearing fluorescent yellow vests joined the nationwide protests – from southerly Provence to northerly Normandy and in between – that have laid bare growing anger over stagnant spending power and the rollback in public services in some parts of the country.

Two people have died and more than 750 others, including 136 police officers, have been injured during the week of demonstrations, which have also spread to French territories abroad, including the Indian Ocean island of Reunion.

Since assuming office in May 2017, Macron has also seen off trade union and street demonstrations against his changes to labour rules.

Political foes meanwhile have dismissed him as the “president of the rich” for ending a wealth tax, while his popularity has slumped at barely 20 percent.

In Paris, demonstrators at Champs-Elysees sang the national anthem and waved French flags while others carried signs with slogans saying “Macron, resignation” and “Death to Taxes”.

Some members of the crowd were reportedly seen overturning a large vehicle, digging up cobblestones and building barricades, while others tried to break through a police security cordon around sensitive sites, including the presidential palace, in the heart of the capital.

No one was injured in the clashes but six people were arrested for “throwing projectiles”, police told The Associated Press news agency.

Some protesters condemned the police for firing tear gas and water cannon against them.

“We have just demonstrated peacefully, and we were tear-gassed … we see how we are welcomed in Paris,” Christophe, a 49-year-old who had travelled to Paris from the Isere region in eastern France with his wife, told the AFP news agency.

Authorities, meanwhile, claimed the unrest was linked to the “presence of members of the far right who harassed the security forces”.

“The ultra-right is mobilised and is building barricades on the Champs Elysees. They are progressively being neutralised and pushed back by police,” he said.

Le Pen repudiated Castaner’s claim in a tweet, saying she had merely questioned why no protests were being allowed in the area.

According to Bruno Cautres, a political scientist at the Paris Institute of Political Studies, commonly referred to as Sciences Po, the president’s push to increase fuel taxes was “simply a drop of water that broke the mud”.

“Macron raised a lot of expectations and hope that people would become better off after his election,” Cautres told Al Jazeera from Paris.

“But these people [the protesters] don’t see changes in their daily lives, they feel a lot of frustration and believe they pay too much tax but don’t get enough [from the government],” he said. 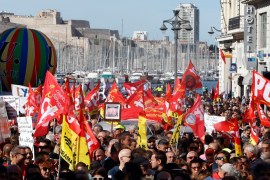 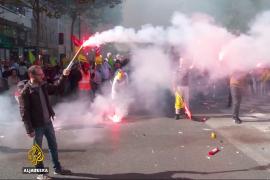 Unions and supporters of the left-wing opposition in France are gathering for the latest in a series of protests against the president’s new labour laws. 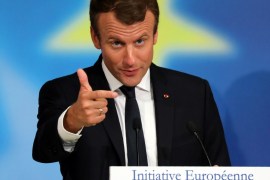