US President Donald Trump has said that his administration will release a full report in two days about the killing of Saudi journalist Jamal Khashoggi.

Trump told reporters on Saturday that the report will include information on “who did it”.

“We’ll be having a very full report over the next two days, probably Monday or Tuesday,” he said.

Khashoggi, a Washington Post columnist and a critic of Saudi Crown Prince Mohammed bin Salman, was murdered at the kingdom’s consulate in Istanbul on October 2 after he went there to obtain marriage documents.

The whereabouts of his remains are still unknown.

Turkish and Saudi authorities say Khashoggi was killed inside the consulate by a team from the kingdom, but they disagree on whether the murder was premeditated.

The CIA has concluded that the crown prince, also known as MBS, ordered the killing of Khashoggi, according to reports in the US media in recent days.

Other US officials familiar with the case have cautioned that while it is likely that MBS was involved in the death, questions remain about what role he played, according to The Associated Press news agency.

Saudi Arabia has repeatedly changed its narrative of the killing, first denying knowledge of the journalist’s whereabouts and later saying he was killed when an argument turned into a fistfight.

Last week, Saudi authorities announced that Riyadh was seeking the death penalty for five people accused of “ordering and committing” the murder.

Shaalan al-Shaalan, the kingdom’s deputy public prosecutor, told a news conference in Riyadh that a 15-member squad was formed to bring Khashoggi to Saudi Arabia from Istanbul “by means of persuasion”. But after “talks with him failed” inside the consulate, Khashoggi was killed with “a large amount of a drug resulting in an overdose” and then dismembered, in the kingdom’s latest account of what happened.

Al-Shaalan also said MBS was not implicated in the gruesome murder.

On Saturday, a day after the reports on CIA’s conclusions in the case, the US State Department said in a statement “there were numerous unanswered questions” with respect to Khashoggi’s murder.

“Recent reports indicating that the US government has made a final conclusion are inaccurate,” it said, adding that the government is “determined to hold all those responsible for the killing of Jamal Khashoggi accountable”.

The murder of Khashoggi triggered an international uproar that has frayed the decades-long relationship between Washington and Riyadh.

Intelligence officials have been providing information to Trump about the death for weeks and he was briefed again by phone on Saturday by CIA Director Gina Haspel and Secretary of State Mike Pompeo as he flew to California.

White House Press Secretary Sarah Huckabee Sanders provided no details of his call but said the president has confidence in the CIA.

Before his call on Air Force One, Trump told reporters that when it came to the crown prince, “as of this moment we were told that he did not play a role. We’re going to have to find out what they have to say”.

That echoed remarks by National Security Adviser John Bolton, who said earlier this week that people who have listened to an audio recording of the killing do not think it implicates the crown prince.

Before leaving on his trip, Trump also said Saudi Arabia was “a truly spectacular ally in terms of jobs and economic development”.

“I have to take a lot of things into consideration” when deciding what measures to take against the kingdom, he said.

Trump has called the killing a botched operation that was carried out very poorly and has said “the cover-up was one of the worst”.

But he has resisted calls to cut off arms sales to the kingdom and has been reluctant to antagonise the Saudi rulers. Trump considers the Saudis vital allies in his Middle East agenda.

Members of the US Congress are pushing Trump for a tougher response to the killing. The administration last week imposed economic sanctions on 17 Saudi nationals for their alleged role in the killing.

The measures, which follow travel bans already in place, freeze any assets the 17 may have in the US and prohibit Americans from doing business with them.

The sanctions were imposed under the Magnitsky Act, which targets the perpetrators of serious human rights abuses, in a rare move against Riyadh.

But American legislators have also called on the administration to curtail arms sales to Saudi Arabia or take other, harsher punitive measures.

US Vice President Mike Pence told reporters travelling with him on Saturday for the APEC summit in Papua New Guinea that the “murder of Jamal Khashoggi was an atrocity”.

“It was also an affront to a free and independent press, and the United States is determined to hold all of those accountable who are responsible for that murder,” he said. 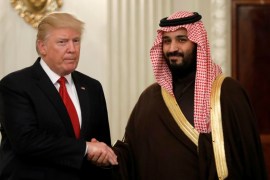 Will the US punish Mohammed bin Salman over Khashoggi’s murder?

The CIA is reported to have concluded that the Saudi crown prince ordered the killing of Jamal Khashoggi. 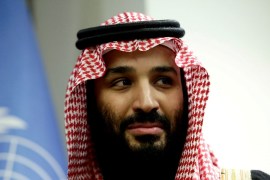