A landslide has hit Peru, burying some 80 houses.

The avalanche of rocks and mud fell on a town in the Huanuco province, about 350km northeast of Lima, according to Peru’s civil defence agency INDECI.

Emergency shelters have been set up for the affected families and troops sent to secure the area.

Fortunately, no death was reported in the landslide, but the rains are expected to continue and there is a risk of more landslides in the coming weeks.

Rains across South America are expected to be heavy between November and March because El Nino is developing in the Pacific Ocean.

El Nino is the slight warming of the waters in the Pacific and is known to affect the weather around the world, often triggering floods in Central Africa, a warm winter in eastern Canada, and a drought in Southeast Asia.

In South America, El Nino usually brings flooding to Peru, Bolivia, northern Chile and northern Argentina. Although the El Nino conditions are still emerging, it appears that the rains have already started.

Over the past few days, torrential rains have been falling over parts of Peru, with landslides already hitting the Bagua city of Amazonas region. Many other mountainous regions are on a high alert.

Argentina has also been hit by severe storms. On Saturday, the first leg of the Copa Libertadores football final between Argentina’s Boca Juniors and River Plate had to be postponed because heavy rain triggered flooding.

On Monday, a large tornado was caught on the camera in Santa Fe province.

The precipitation in Argentina has eased for now, but heavy rain is forecast over the weekend.

In Peru, heavy showers are likely and the whole region looks set for more wet weather disruption over the coming months. 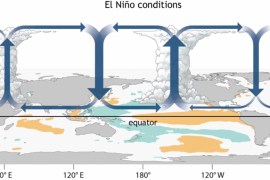 After a winter of drought, Australia faces failing summer rains too as the oceans adopt an unfavourable pattern. 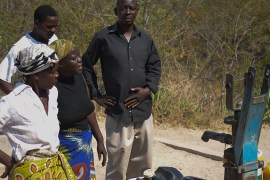 ‘We are absolutely cursed’: Farmers despair over El Nino warning 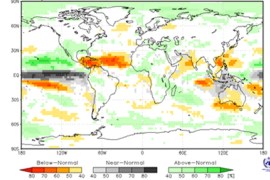 This winter will likely see another El Nino event develop, not as strong as 2015-16, but still impacting global weather.