Brett Kavanaugh has been sworn in as the 114th US Supreme Court justice after the Senate narrowly voted to confirm him.

The confirmation on Saturday ended a bitter battle between Republicans and Democrats during a confirmation process that transfixed the nation following allegations of sexual misconduct against the nominee, which he has denied.

The confirmation is seen as a clear win for President Donald Trump in his efforts to further push the court to the right.

“I applaud and congratulate the US Senate for confirming our GREAT NOMINEE, Judge Brett Kavanaugh, to the United States Supreme Court,” Trump tweeted just after the vote.

Kavanaugh replaces Justice Anthony Kennedy, who retired earlier this year. Although Kennedy was seen as a conservative judge, he was often a swing vote on key issues such as reproductive rights, affirmative action and gay rights.

Kavanaugh’s confirmation comes a little less than three weeks after Christine Blasey Ford publicly accused Kavanaugh of sexually assaulting her in the 1980s. According to Ford, the judge groped her and tried to remove her clothing at a party when they were both teenagers. Two other women also came forward with sexual misconduct allegations against Kavanaugh. The judge has vehemently denied the allegations.

Ford’s allegations disrupted what had appeared to be a relatively smooth confirmation process for Kavanaugh. Following the accusations, both Ford and Kavanaugh gave emotional testimonies in front of the Senate Judiciary Committee. The testimony eventually led to a limited FBI investigation into the allegations.

On Thursday and Friday, senators and select aides read the secret FBI report. Republicans called it “very thorough”, while Democrats said the report “looks to be a product of an incomplete investigation”. Ford’s lawyers denounced the probe, saying an “FBI investigation that did not include interviews of Dr Ford and Judge Kavanaugh is not a meaningful investigation in any sense of the word.”

Kavanaugh’s confirmation seemed all but sure on Friday when key Republicans and one Democrat, who had been undecided on the nomination, said they would support the judge.

Republican Senator Jeff Flake of Arizona and Susan Collins of Maine cast their votes in favour of Kavanaugh. Democratic Senator Joe Manchin of West Virginia was the sole member of his party to vote for the nominee. Manchin is running for re-election in his traditionally Republican state.

Saturday’s confirmation may give Trump a boost as he continues to hit the campaign trail on behalf of Republicans in the lead up to November’s midterm elections. It may, however, also galvanise Democratic supporters.

Bill Schneider, a US political analyst, said that the confirmation process represents a turning point for the country.

“It really captures the polarisation, not just of the Court, but of all American political institutions and of the country,” Schneider told Al Jazeera. “President Trump was elected because of that polarisation,” he added. “He exploited it in ways that no president before him has ever done, and the country remains as bitterly divided as it has been since the Civil War in the United States.”

Several polls show that Republican enthusiasm about voting, which had lagged behind, jumped after the Kavanaugh hearing last week.

Senate Republican leader Mitch McConnell told the Reuters news agency that the political brawl over Kavanaugh will help Republicans at the elections.

“Nothing unifies Republicans like a court fight,” McConnell said in an interview before the vote. “It’s been a seminal event leading into the fall election.”

But Democrats hope women angered at the Kavanaugh accusations will turn out in large numbers to vote out Republicans.

Thousands of protesters gathered on Capitol Hill prior to the vote, chanting “November is coming!” and “Vote them out!”. At least 150 people were arrested. Some also disrupted the vote in the Senate chambers. A smaller group of Kavanaugh supporters also gathered.

Protesters wore the comments President Trump has made about women as they demonstrated outside the Supreme Court: pic.twitter.com/RjTl5uMpj9

After the vote, protesters moved to the Supreme Court building and occupied the steps. Online, some activists reported that police started to arrest those refusing to leave.

One protester told Al Jazeera that she was not surprised by the vote.

The Women’s March tweeted that the movement is going to become “strong because we are fighting for our lives”.

“Women – and especially women of colour – are voting, we are running for office, and we are organizing in numbers large enough to overturn every last remnant of the Trump Agenda.”

Our movement is only getting stronger because we are fighting for our lives. Women — and especially women of color — are voting, we are running for office, and we are organizing in numbers large enough to overturn every last remnant of the Trump Agenda.

Senator Dianne Feinstein, the senior Democrat on the Senate Judiciary Committee, said on Twitter: “Confirming Brett Kavanaugh in the face of credible allegations of sexual assault that were not thoroughly investigated, and his belligerent, partisan performance … undermines the legitimacy of the Supreme Court.” 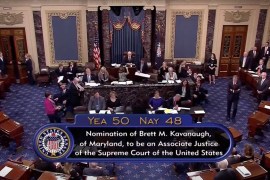 How did US senators vote on Kavanaugh?

Senate votes 50-48 to confirm Brett Kavanaugh to the Supreme Court. Here’s how each senator voted. 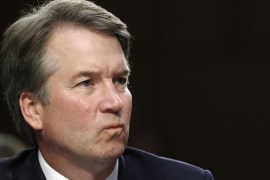 Senate votes to confirm Kavanaugh to the US Supreme Court. 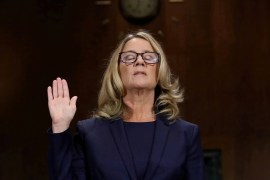 The Kavanaugh scandal is an opportunity to finally talk about the economic toll sexual assault takes on our society. 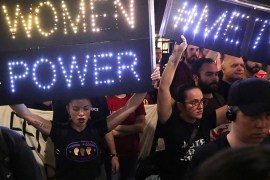 Tarana Burke says #MeToo has come a long way, but misconceptions about sex assault continue to play out on public stage.