The only surviving full brother of Saudi Arabia’s King Salman has reportedly returned to the kingdom, amid an international outcry over the killing of journalist Jamal Khashoggi.

Prince Ahmed bin Abdulaziz flew back to Riyadh from London on Tuesday, according to three Saudi sources close to the prince cited by The New York Times, in what some analysts are calling a potential challenge to the authority of Saudi Arabia’s de facto ruler Crown Prince Mohammed bin Salman.

Sources told the Times that Prince Ahmed arrived in the Saudi capital around 01:30 on Tuesday (22:30 GMT on Monday) and was warmly received by his nephew, the crown prince, who greeted him at the airport.

London-based Middle East Eye also reported Prince Ahmed’s return, quoting a source close to the prince as saying his return is intended to shake up the kingdom’s leadership.

“The prince wants to play a role to make these changes, which means either he himself will play a major role in any new arrangement or to help choose an alternative to MBS,” the source was cited as saying.

David Hearst, editor-in-chief of the Middle East Eye, said that Prince Ahmed’s arrival is likely to cause some discomfort for the crown prince.

“Mohammed bin Salman has become a focus of the [royal] family’s discontent, a symbol of it. Prince Ahmed had always made his objection to the crown prince known.

“He was one of the three members on the allegiance council who did not vote for him. He’s made other public signs of his disapproval,” Hearst said.

One of the most senior members of the royal family, Prince Ahmed – who has been living in the United Kingdom – is said to have agreed to return to Riyadh only after receiving security assurances from the UK and United States.

Reports say the prince had been afraid to return after publicly challenging bin Salman on several occasions.

In November 2017, bin Salman conducted a sweeping purge of senior ministers and princes as part of purported anti-corruption measures.

The supposed return comes almost a month after Khashoggi, a Saudi journalist who wrote for the Washington Post, was killed in the Saudi consulate in Istanbul, Turkey, on October 2.

Eighteen men have been arrested in Saudi Arabia in connection with the murder, which is thought to have been ordered by top-level Saudi officials. Investigations are ongoing.

The younger brother of King Salman, Prince Ahmed, now in his 70s, is one of the most senior members of the Saudi royal family. His position as the king’s brother lends him a special importance in the kingdom.

He and the king are the last remaining members of the powerful “Sudairi seven”, a bloc comprised of the seven sons of King Abdul Aziz – considered the kingdom’s modern founder – and his favourite wife Hussa bint Ahmed al-Sudairi. The brothers banded together to ensure the throne and important ministries passed between them and stayed out of the reach of the king’s dozens of other sons.

Mahjoob Zweiri, director of the Gulf Studies Center at Qatar University, said the apparent arrival of Prince Ahmed in Riyadh could signal a change at the top of the Saudi leadership.

“I think the gesture means there is a change coming some time soon,” he told Al Jazeera. “Let’s not forget there is also a level of anger at the behaviour of Mohammed bin Salman when it comes to the region and inside Saudi Arabia. There are forces inside Saudi Arabia that are not happy with what’s happening.”

Prince Ahmed caused controversy in September when a video of him speaking to protesters in London sparked concerns about his loyalty to bin Salman.

The nearly two-minute clip appeared to show him asking demonstrators protesting the kingdom’s role in the war in Yemen why they were complaining to him instead of the king and crown prince. He also said he hoped that wars in Yemen and elsewhere would stop as soon as possible.

Shortly afterwards, Prince Ahmed issued a brief official statement saying that his comments were intended to clarify that “the king and crown prince are responsible for the state and its decisions”.

What does this mean for the Khashoggi case?

Al Jazeera’s Zeina Khodr, reporting from Istanbul, said the timing of Prince Ahmed‘s return – which has not been officially confirmed by Riyadh – is significant.

It comes at a time when Saudi Arabia has come under international pressure to come clean on exactly what happened inside its consulate and to come clean on who ordered that killing, the Al Jazeera correspondent said.

“… many in the international community believe that order was given by Crown Prince Mohammed bin Salman.”

“What is happening inside the royal family in the kingdom, it is hard to say for the time being but there is no doubt that this crisis could have repercussions for the Saudi royal family, for Saudi Arabia.

“Is something being worked out behind the scenes that will satisfy all parties? … now there seem to be attempts to contain this crisis,” she said.

“There was serious pressure on the ruling family in Saudi Arabia, on the crown prince himself, there is a serious critique to his foreign policy and his political behaviour and it’s obvious that the UK and the United States have decided to have a serious move,” he told Al Jazeera.

“I think they want to move for the sake of protecting their national interests in the region because Saudi Arabia is, for them, an important player in the Middle East region,” he said. “They have to choose whether the future of Saudi Arabia is collaboration with the international community or keeping Mohammed bin Salman”. 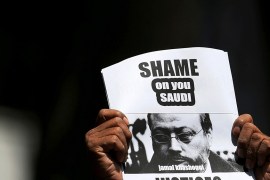 The first public revelations in killing come after talks with Saudi prosecutor produced ‘no concrete results’. 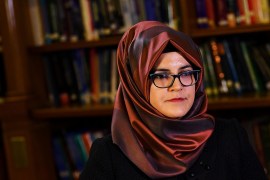 Hatice Cengiz tells Saudi leaders to return her fiance’s remains, warns Trump not to ‘pave the way for a cover-up’.