On October 30, a court doubled Zia’s jail term from five to 10 years following an appeal by the country’s Anti-Corruption Commission, a decision that effectively ruled out her chances of contesting a general election in December.

In February, Zia, 73, was first sentenced to five years in jail for embezzling $252,000 in foreign donations for an orphanage trust set up in the name for her husband and former Bangladesh president, Ziaur Rahman.

She has rejected the charges as “politically-motivated”, insisting “not a penny” was stolen. Her party, the BNP, says her conviction is aimed at keeping her and her family out of politics.

“This is an attempt to use the court against me, in an effort to sideline me from politics and elections and to isolate me from the people,” Zia had said in February.

Zia and Hasina, both related to former national leaders, have dominated politics in Muslim-majority Bangladesh for more than two decades, nursing a long and bitter rivalry.

Her son and heir-apparent Tarique Rahman was jailed for life in absentia this month over a 2004 grenade attack on a Hasina political rally. Rahman lives in exile in London.

In recent months, Zia’s health has deteriorated inside the abandoned 19th-century jail – where she is the only inmate – with a physician saying that arthritis has rendered her left hand useless.

Initially dismissed by her critics as a politically inexperienced housewife, Zia has served twice as prime minister.

A reluctant recruit to Bangladeshi political life, Zia went on to lead the BNP in 1981 after her husband, the then president Ziaur Rahman, was assassinated in an attempted military coup.

A 35-year-old mother of two at the time of her husband’s death, Zia became Bangladesh’s first woman prime minister a decade later.

Along with her political nemesis and current Prime Minister, Sheikh Hasina, Zia was charged with corruption by an interim government established by the military in 2007.

As part of a deal to allow Zia to resume political life, her two sons – also accused of corruption during her 2001-06 term – relocated to the UK. 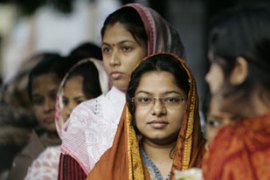 Bangladesh heads to the polls 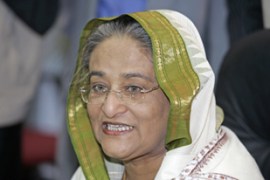 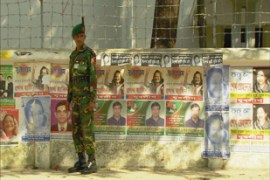