Turkey has ramped up pressure on Saudi Arabia over the murder of Jamal Khashoggi, demanding Riyadh reveal who gave the order to kill the journalist in the kingdom’s consulate in Istanbul.

“If you are determined to lift this shroud of mystery, then this is the key point of our collaboration,” Turkish President Recep Tayyip Erdogan said in a speech on Friday in the capital Ankara.

Addressing provincial members of his Justice and Development Party (AK Party), the president said Turkish authorities have gathered more evidence, which will be made public “when the time comes”.

He added that he suspected Khashoggi’s killer is among the 18 men arrested by Saudi Arabia in connection to the case and called on the kingdom’s authorities to identify the “local collaborator” whom they say disposed of the journalist’s body.

“You have to announce it,” he added.

Erdogan branded the kingdom’s various explanations for Khashoggi’s disappearance and death as “childish statements do not go hand in hand with statesmanship or seriousness of a state”.

He also said the Saudi public prosecutor will arrive in Istanbul on Sunday and meet Turkish investigators.

On October 20, after more than two weeks of denials, the kingdom finally confirmed Khashoggi’s death on October 2, claiming he had died in a fistfight.

In his first major speech on the case earlier this week, Erdogan called Khashoggi “the victim of a vicious murder” and called for an independent international probe into the incident. He also referred to Saudi King Salman respectfully but did not refer directly to MBS by name.

According to Mehmet Celik, a journalist from the pro-government English language newspaper Daily Sabah, Erdogan appeared to harden his tone with his latest remarks.

“I think the [tone] and the language he used was significant in today’s speech; he was definitely harsher,” Celik told Al Jazeera.

“He said the explanations made so far by Saudi Arabia were ‘childish’ and he demanded more concrete and consistent answers,” added Celik.

Sinan Ciddi, executive director at the Institute of Turkish Studies at Georgetown University, told Al Jazeera Erdogan is attempting to not only raise Turkey’s profile vis-a-vis Saudi Arabia but also to recast Ankara’s deteriorating relations with its international allies.

“He’s showing partners that there might be problems in Turkey, but that at least Turkey is not Saudi Arabia.”

Ciddi said Erdogan has adopted a more careful approach compared with how he has handled other foreign policy issues in the past.

“Ahead of the Turkish presidential elections, Erdogan took a very aggressive stance versus Europe – and that backfired for him,” Ciddi said, referring to Turkey’s strained relations with major European countries.

“This time he has been more cautious.

“For example, he has said that the Turks have more evidence but hasn’t put the actual evidence out there yet. That would really annoy the Saudis, so he hasn’t done that.”

As a result of Erdogan’s handling, Ciddi noted, Turkey appears to have emerged stronger from the crisis and is being taken more seriously at the international level.

“This is really a gift that landed in his lap.”

Erdogan’s speech came a day after several vigils were held around the world to commemorate the slain journalist.

Members of the Jamal Khashoggi Friends Association gathered outside the Saudi consulate in Istanbul and said they would do anything to uncover the truth behind the killing.

“On this occasion, and from this place where the spirit of Jamal has been lost, we clearly state that we will not accept compromises in the case of his murder, and that we will not keep silent on any attempt to evade any criminal from accountability and punishment,” the group said.

With reporting by Yarno Ritzen in Istanbul 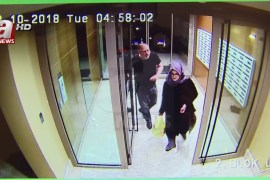 Hatice Cengiz speaks to Turkish TV and calls for punishment for all involved in his ‘savage’ murder. 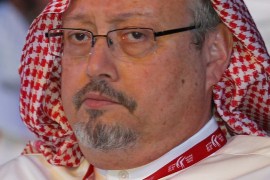 UN official: Khashoggi was victim of an extrajudicial execution 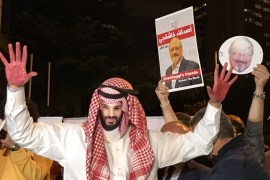 At a vigil in Istanbul, friends and supporters of the slain Saudi journalist call for justice, stress press freedom.