Turkey, Istanbul – Turkish President Recep Tayyip Erdogan has said the murder of journalist Jamal Khashoggi at the kingdom’s consulate in Istanbul was planned by Saudi officials days in advance.

Addressing legislators from his Justice and Development Party (AK Party) on Tuesday, Erdogan detailed Khashoggi’s disappearance and murder but stopped short of accusing Saudi royals of the “savage” killing that has caused global outrage.

“On September 28, Khashoggi arrived at the Saudi Arabian consulate for him to sort out his wedding paperwork,” Erdogan said during the speech in the Turkish parliament in the capital, Ankara.

“It seems that at that time they [Saudi Arabian officials] started to plan a roadmap for his murder.”

He added that some Saudi officials left Turkey and travelled to Saudi Arabia, “indicating they planned the murder”.

Until Tuesday’s speech, Erdogan had remained largely silent on the case, although unnamed Turkish officials have leaked information about the murder, including information about a 15-member Saudi “assassination team” who flew into Istanbul on two chartered planes.

In the wake of intense global pressure, Saudi Arabia admitted last week that Khashoggi was killed inside its Istanbul consulate on October 2 as a result of a “fistfight” during an interrogation.

Erdogan called the killing a “political murder”, adding that international investigators should be included in the probe.

The Turkish leader went on to call the killing “savage”, adding that Ankara would continue its investigation until all questions have been answered.

“Why did they [the Saudi team] come to Istanbul, on instruction by whom?” Erdogan asked, adding that Saudi Arabia should make clear why it did not let investigators into the consulate until days later.

‘Where is the body?’

Galip Dalay, visiting scholar at the University of Oxford, stressed the significance of Erdogan’s speech.

“The most important thing is that Erdogan confirmed everything we sort of heard through other channels,” he told Al Jazeera. “However, now it’s no longer attributed to unnamed Turkish officials, but it’s the president of Turkey who has confirmed what has happened,” Dalay said.

Erdogan also demanded answers on what happened to Khashoggi’s body, mentioning reports that a local cooperator allegedly disposed of it.

“Where is the body? There are claims his body has been given to a local person, but who is this local person?” Erdogan asked.

“Nobody is allowed to think this case will come to an end without answering all these questions,” he added.

The Turkish president also said Saudi Arabia was taking the right steps by working with Ankara on the investigation and carrying out the 18 arrests.

Dalay, who is also a non-resident fellow at Brookings Institution Doha, underlined Erdogan’s “distinction” in his speech between King Salman and his son, bin Salman.

“Everything that Erdogan provided pointed towards MBS, without naming the crown prince specifically,” said Dalay, adding that the Turkish president was clearly trying to prevent a full-blown crisis between Ankara and Riyadh.

On Sunday, speaking in an exclusive interview with Fox News, Saudi Arabia’s Foreign Minister Adel al-Jubeir said Khashoggi’s killing inside the consulate was “a terrible tragedy” and that MBS had nothing to do with it.

Taha Ozhan, research director at the Ankara Institute, told Al Jazeera that he thought Erdogan was taking the right steps.

“The Saudis know very well what Turkey knows, and what Erdogan has been doing is the right thing, namely asking the Saudis for full cooperation in this case.” 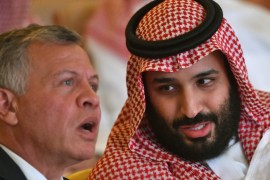 Cheers, claps as MBS shows up at ‘Davos in the desert’ event

MBS says he is satisfied with Riyadh conference despite boycott by politicians and businesses over Khashoggi killing. 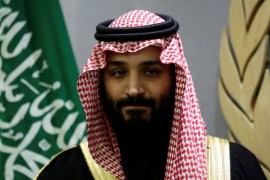 The Khashoggi murder and the one-man rule of MBS

The cult of personality MBS has built to consolidate power may finally be crumbling following the Khashoggi murder. 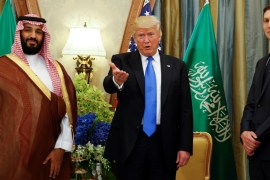 Can Saudi Arabia get away with murder?