In an official declaration, members of the Holy Synod wrote that allowing another church to break away “is tantamount to renouncing its historical roots and commitments” making it “impossible” for the Russian Orthodox Church to continue its union with Constantinople.

The Holy Synod has also urged other Orthodox Churches to properly evaluate a decision taken by Constantinople and to “search for ways out of the gravest crisis that is tearing apart the body of church”.

On October 15, the Istanbul-based leader of the Eastern Orthodox Church, Ecumenical Patriarch I Bartholomew of Constantinople, took the monumental decision to recognise the full independence of the Ukrainian Orthodox Church, after a three-day Synod.

Speaking at a press conference last Thursday, Ukraine‘s President Poroshenko dubbed the decision a “historic event” and a “victory of good over evil”.

A spokesman for Russian Patriarch Kirill said it “crossed a red line” and is “catastrophic” for the entire Orthodox world.

The split is seen to have a deep political significance. Poroshenko said the decision was an issue about Ukraine’s statehood, national security and global geopolitics.

“This is the collapse of Moscow’s centuries-old claims for global domination as the Third Rome,” he said. “The independence of our church is part of our pro-European and pro-Ukrainian policies that we’ve been consistently pursuing over the last four years.”

For more than three centuries, Ukraine and Russia have been united in the Russian Orthodox Church.

When it gained independence in 1991 following the fall of the Soviet Union, Ukraine strove to establish religious independence and an Orthodox Church of the Kiev Patriarchate was created.

The popularity of the Kiev Patriarchate and calls for Ukraine’s independence have increased since Moscow annexed the Ukrainian peninsula, Crimea, in 2014.

Volodymyr Yermolenko, a Ukrainian writer and director at Internews Ukraine, said the move could create divisions in and beyond Ukraine.

“It’s possible some will support Constantinople, while some will turn to Russia. Russia will no longer recognise the Ukrainian Church and only see it as schismatic,” he said. “This could increase tensions, even though the whole idea was to end schism in Ukraine, by recognising those who are not willing to be under the Russian Church.”

Beginning under then-President Boris Yeltsin, and continuing under President Vladimir Putin, the church has seen a massive national revival in its following. It is widely seen as a pillar of the Russian state in its promotion of traditional values.

Many analysts, such as Jakub Janda, a director at the Prague-based think-tank, European Values, consider the Russian Orthodox Church a tool for spreading Russia’s influence, and “entails the promotion of Russian nationalist and imperialist ambitions”.

It is the largest branch of the Orthodox faith representing half of the world’s 200 million or Orthodox believers, including Ukrainian followers, dwarfing the 17 remaining official Orthodox Churches. 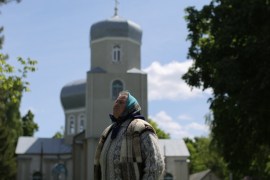 A conflict of faith between Russia and Ukraine

The political and military conflict is playing out in churches across Ukraine, as some split from the Moscow Patriarchy.