If Leslie had hit Portugal as a hurricane, it would have been the first time in recorded history that Europe had seen the landfall of a hurricane.

As it happened, Leslie was officially a hurricane until re-classified as a post-tropical cyclone at 18:00 GMT by the National Hurricane Centre in Florida.

Leslie made landfall about four hours later, near Coimbra, halfway between the cities of Lisbon and Porto, Portugal. Winds were recorded as 122km an hour in Coimbra but were reportedly as high as 176 km/h at Figueira da Foz. Local media reported many trees down and electricity supplies cut to 15,000 households.

This is not the first time that Europe has been hit by destructive winds from cyclones. These are often formed from the remains of hurricanes that have originally plagued the US East Coast.

However, two recent examples have been unusual – Leslie and Ophelia.

In 2017, Ophelia became a hurricane in the eastern Atlantic, on the same latitude as the Canary Islands but took an unexpected path. It moved northeastwards, becoming a category-3 hurricane (on the Saffir Simpson scale) as it skirted east of the Azores.

It maintained hurricane status until level latitude with the Brest Peninsula in northwest France. Ireland was in the warning cone and was hit by Ophelia, although she was by then an extra-tropical storm.

Hurricanes need certain conditions to exist but they obtain all their energy from the warmth of the ocean over which they circulate.

Historically, the only part of the Atlantic that has that warmth is the water either side of the equator, up to about 20 degrees north or south.

The Caribbean, Gulf of Mexico and Gulf Stream current all extend the warmth but in the eastern Atlantic, nothing does. Except for a warming ocean.

It was therefore a surprise when the National Hurricane Centre issued this: “A Tropical Storm Warning has been issued for Madeira Island (north of the Canary Islands) in the far eastern Atlantic Ocean due to #Leslie. Tropical-storm-force winds are expected early Saturday morning.”

According to Dr Tom Gill at University of Texas – El Paso, (citing a NOAA hurricane discussion about Leslie) “…It is the first known tropical storm warning for that place, and there are no known tropical storms in the historical record anywhere within 100 miles of that island, with the closest being Vince of 2005.”

Sea surface temperatures from Madeira up to the south coast of Portugal are anything up to two degrees Celsius above average and this is consistent with climate change forecasts. As the water warms, the area over which hurricanes can exist also extends.

Sometime in the next few years, Madeira will see more tropical storm warnings and Portugal may well get hit by an actual hurricane. 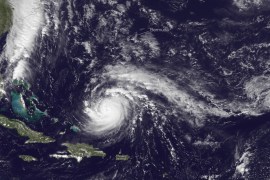