Rebel fighters have fired mortar shells from a planned buffer zone in northwestern Syria, despite an apparent heavy arms pullout days earlier, according to a monitoring group.

The UK-based Syrian Observatory for Human Rights (SOHR) said rebels in the demilitarised zone around the northwestern region of Idlib fired several “mortar shells at an army position in nearby Hama province, killing two soldiers” late on Saturday.

Also on Saturday, rebels shelled Aleppo province from other parts of the demilitarised area, with no casualties recorded, according to SOHR.

“This is the first clear violation of the deal since the heavy weapons were withdrawn. This area is supposed to be clear of heavy weapons, including mortar shells,” SOHR head Rami Abdel Rahman told the AFP news agency on Sunday.

In a statement on Twitter on Sunday, the group said that government forces had returned fire in a lengthy “exchange of violations” of a deal to rid the enclave of heavy weapons.

#SOHR A day before the end of the deadline for the "jihadis" to leave…#Hama and #Aleppo witness about 17 hours of exchange of violations by using heavy weapons left human losses in the ranks of the regimehttps://t.co/wkUWx6JWdn

Idlib is the last remaining rebel-held area in war-torn Syria.

Russia, an ally of Syrian President Bashar al-Asaad, struck a deal with Turkey in September to set up a demilitarised zone to prevent a potentially devastating regime assault on Idlib.

The deal required the horseshoe-shaped area to be free of heavy arms by October 10, with “radical fighters” leaving by Monday.

The National Liberation Front (NLF), an umbrella organisation of Turkey-backed rebels, confirmed to Al Jazeera on Wednesday that they had complied with the first part of the deal.

“Our heavy weapons – including tanks and cannons – have been moved to the back lines of the de-militarised zone so that they are no longer a target for the Russian warplanes,” NLF spokesperson Naji al-Mustafa, told Al Jazeera.

“We will remain in our defence lines with our small arms and light weapons,” he said. 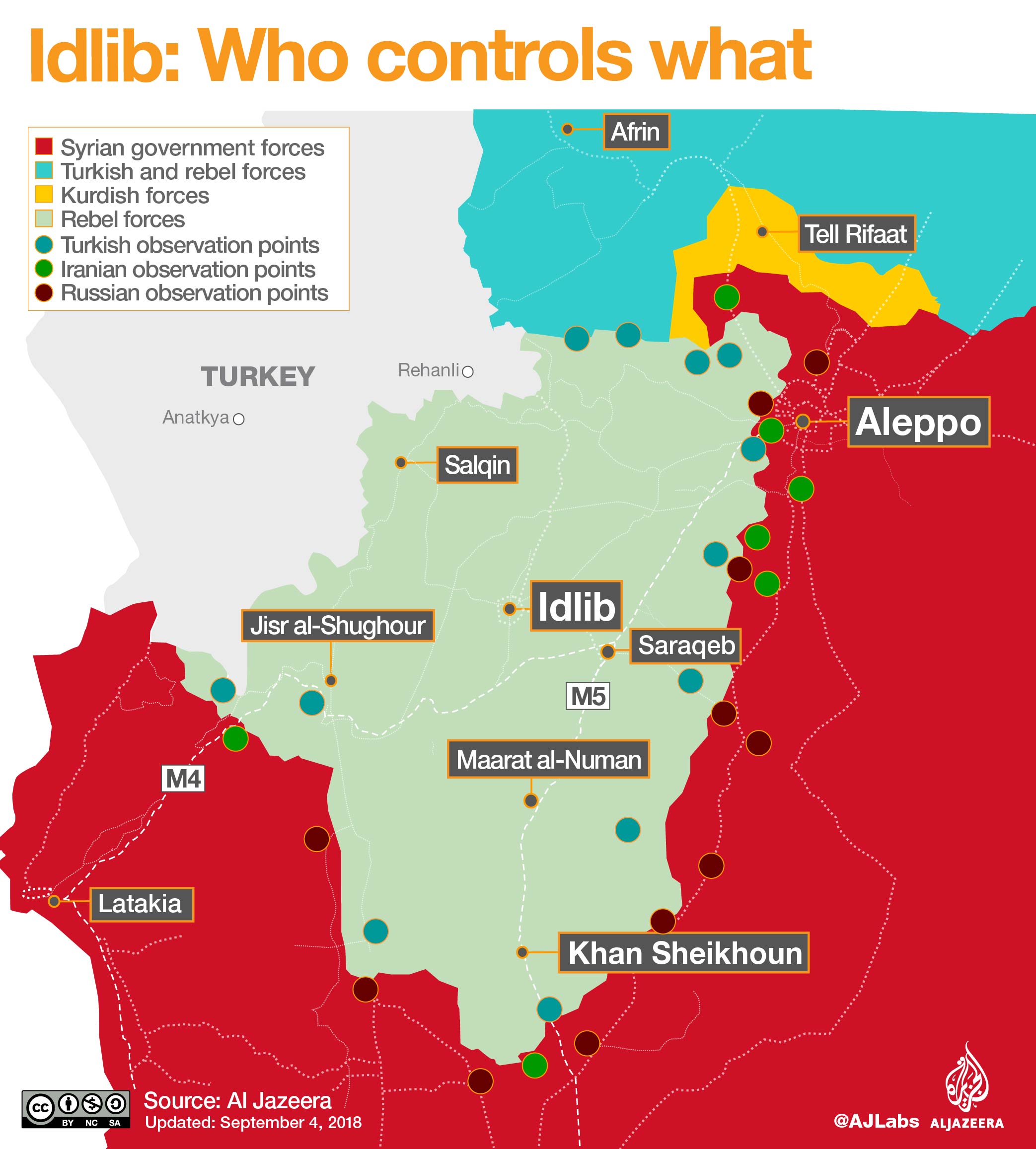 Before reports of shelling emerged, there had been no signs of rebel fighters leaving the area, according to SOHR.

“We have not monitored any withdrawals by rebel fighters at all from areas falling in the planned buffer zone,” a spokesperson from the group said on Sunday.

A correspondent for AFP in Idlib also said no rebel units had left in recent days.

Sunday’s shelling throws the future of the deal into uncertainty. The agreement, signed on September 17 in the Russian resort city of Sochi, averted a large-scale offensive, which the United Nations has said could cause massive displacement and bloodshed.

The UN warned that such action would provoke a humanitarian disaster in the region, where as many as 800,000 people – half of whom are internally displaced from previous offensives – could be forced to flee again by a regime assault on Idlib and surrounding areas.

Nearly three million people live in the zone now, hundreds of thousands of them already displaced by the brutal seven-year war and others heavily dependent on humanitarian aid to survive.