UN Secretary-General Antonio Guterres has visited the Indonesian city of Palu to assess the impact of the earthquake and tsunami, as the World Bank announced five million dollars in financial aid for reconstruction, which authorities say could take two years.

Guterres’ visit on Friday came as Palu marked the two-week anniversary of the disaster with a mass prayer service attended by thousands of survivors.

The UN chief and Indonesian Vice President Jusuf Kalla toured one of the worst-hit areas, and spoke with survivors being treated at an outdoor tent hospital and evacuation centre, praising their “resilience” amid the devastation.

“We are with the people of Indonesia and Sulawesi,” Guterres said after surveying the devastation at Balaroa, a hard-hit neighbourhood in Palu.

Here in Palu,I saw first-hand the destruction caused by the recent earthquake and tsunami. To the many people I saw and spoke to: your strength and resilience are remarkable. The U.N. is with you to support government-led rescue and relief efforts. pic.twitter.com/SbLRZAZ764

“The UN is with you to support government-led rescue and relief efforts,” Guterres posted on his Twitter account, accompanied by a photograph of broken roads and destroyed houses.

Entire villages were sucked into the earth at Balaroa when soil turned to mush under the force of the quake.

Guterres is also in Indonesia to attend the annual meetings of the International Monetary Fund and World Bank on the island of Bali.

On Friday, the World Bank announced that it would release five million dollars in aid to the disaster-hit region of Indonesia, World Bank CEO Kristalina Georgieva said in an announcement on social media.

“We are committed on giving our support in the form of assistance and rehabilitation,” Georgieva was quoted by Indonesian news website, Tempo as saying, following her visit to Palu.

The Asian Development Bank has also pledged up to one billion dollars in emergency loans.

The 7.5-magnitude earthquake and wall of water that tore through the city on Sulawesi island on September 28 killed more than 2,000 and left thousands more missing, presumed dead.

Rescue teams scoured the wreckage for a fortnight before calling off the search, acknowledging as many as 5,000 missing people would never be found.

Nearly 90,000 people were displaced by the quake, forcing them into evacuation centres across the rubble-strewn city.

Officials said it could be two years before all the homeless are found permanent accommodation.

Donations have begun pouring into the coastal city of 350,000 after a slow start which saw Indonesia criticised for stalling the flow of relief supplies.

Getting vital supplies to affected areas has proved challenging as flights into Palu remain limited by its small airport, while overland travel is slow.

Indonesia initially refused international help, saying the army had the situation in hand.

But as the scale of the disaster became clearer, President Joko Widodo reluctantly agreed to allow in overseas aid.

The focus has shifted to the recovery effort. But the memory of the dead and missing remains raw.

Rescuers have struggled to retrieve the dead, the grim job compounded as mud hardened and bodies decomposed in the tropical heat.

The government had declared that the worst-hit areas would be sealed off, effectively becoming mass graves.

Monuments and parks are planned to remember untold numbers of victims buried by soil and rubble in Palu.

But in a debris-strewn clearing by Palu Bay, thousands gathered Friday before sundown for an emotional prayer service to remember those lost.

“I prayed that this disaster will end soon,” said Rostin Timaloto, a 58-year-old woman.

“Only by the grace of God can this ordeal end.” 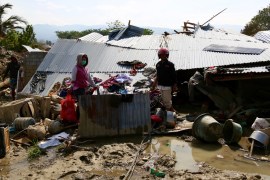 Palu disaster: Road to recovery after escaping the ‘Apocalypse’

Fierceness and scale of the disaster has had many survivors in disbelief how they cheated death. 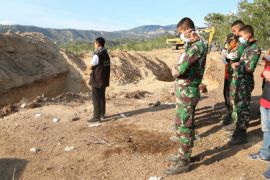 Indonesia earthquake: In Palu disaster, grief has no religion

Powerful temblor triggered a cascade of disasters, including a deadly tsunami and widespread liquefaction on Sulawesi.