The US Department of Defence grounded its global fleet of F-35 stealth fighters on Thursday as a result of the first-ever crash of the costliest plane in history.

A Marine Corps F-35B was completely destroyed in a crash during training in South Carolina on September 28. The pilot safely ejected.

According to Joe DellaVedova, a spokesperson for the F-35 programme, the US and its international partners – including the UK and Israel – have temporarily suspended F-35 flight operations for a fleet-wide inspection of a fuel tube within the aircraft engine.

“The action to perform the inspection is driven from initial data from the ongoing investigation of the F-35B that crashed in the vicinity of Beaufort, South Carolina,” DellaVedova said in a statement.

He added that suspect fuel tubes would be removed and replaced.

Planes that are found to have good tubes already installed will be returned to operational status.

Inspections were expected to be completed within the next 24 to 48 hours.

The United Kingdom, however, said the measure did not affect all of its F-35s and that some flying missions had been “paused,” not grounded.

“Safety is our paramount concern, therefore the UK has decided to pause some F-35 flying as a precautionary measure while we consider the findings of an ongoing inquiry,” a British Ministry of Defence spokesman said.

“F-35 flight trials from the aircraft carrier HMS Queen Elizabeth are continuing and the programme remains on schedule to provide our armed forces with a game-changing capability.”

The South Carolina crash came only one day after the US military first used the F-35 in combat, with Marine Corps fighters hitting Taliban targets in Afghanistan.

“The primary goal following any mishap is the prevention of future incidents,” DellaVedova said.

“We will take every measure to ensure safe operations while we deliver, sustain and modernize the F-35.”

On Wednesday, Defense News reported that Secretary of Defense James Mattis had ordered the Air Force and Navy to make 80 percent of the fleet of key fighters, including the F-35, mission capable within a year.

The order sent ripples through the halls of the Pentagon, where officials have long bemoaned the general lack of readiness for key equipment.

Launched in the early 1990s, the F-35 programme is considered the most expensive weapons system in US history, with an estimated cost of some $400bn and a goal to produce 2,500 aircraft in the coming years.

Once servicing and maintenance costs for the F-35 are factored in over the aircraft’s lifespan through 2070, overall programme costs are expected to rise to $1.5tr.

But the programme has faced numerous delays, cost overruns and setbacks, including a mysterious engine fire in 2014 that led commanders to temporarily ground the planes.

So far, the US military has taken delivery of 245 F-35s, most of them to the Air Force. 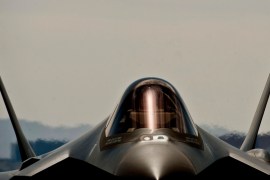 Turkey to receive F-35 jets despite opposition from Senate

US Congress attempted to prevent the sale of fighter jets because of worsening US-Turkey relations.