The eye of the storm, which intensified into a “very severe cyclonic storm” over the Bay of Bengal, made landfall early Thursday in coastal Odisha and Andhra Pradesh states.

There were reports from Odisha’s districts of Ganjam and Gajapati of trees being uprooted along with electricity and communication poles, news agency dpa said.

The two deaths were reported from the city of Srikakulam in Andhra Pradesh. A man was crushed when his house collapsed on him and the other fatality was struck by a falling tree, according to the Times of India.

Officials in neighbouring Bangladesh said they were on alert in the coastal district of Cox’s Bazar, home to around one million Rohingya refugees from Myanmar living in tarpaulin and bamboo shelters.

As it hit the coast, the sustained winds were 165 km/h, meaning the system would have been classed as a Category 2 hurricane if it were rated on the 5-point Saffir-Simpson hurricane scale.

However, it is believed that major damage has been avoided, partly due to the emergency measures which were put in place before the storm hit.

Over 300,000 people were moved to higher ground, schools were ordered to remain closed on Thursday and Friday, air and train travel suspended and fishermen were instructed to stay away from the sea.

The storm is now moving northeast and the winds are weakening. However, more heavy rain is expected in the next 24 hours, which could lead to flooding.

#WATCH: Latest visuals from Andhra Pradesh's Srikakulam after #TitleCyclone made a landfall. pic.twitter.com/itSoHD16wk 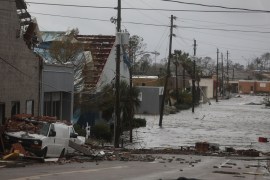 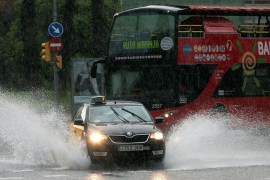 Two British nationals among the dead as cars are swept away by raging, muddy waters in the Spanish island. 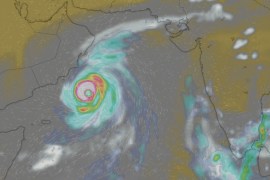